Upon your arrival in the White House I realize you will face many new challenges. In your transition into such a critical position, it is with great hope that I write to you. While there may seem to be much more trying issues as you divulge yourself into a battle of morals, politics, and never ending hard decisions, I ask that you do not to forget your greatest ally- our environment. Mother Earth is in charge of our economy and aspects including oil, water, food and so much more. However, her bountiful gifts to us are being threatened due to a lack of awareness and regulations that could not only protect, but preserve and better her for generations to come. While yes,  I want my children to “know what polar bears are”, I also want them, and their kids after, to live in a world where air is breathable, and water isn't infested with chemicals among other pollutants. So it is with great urgency that I plead you to take a closer look at the well being of not just our nation but also our earth as a whole.

Just recently, in July of 2016, the neglect towards the environment within our government was made visible. The spending bill H.R.5538 was adopted allowing major cuts to our Environmental Protection Agency. As Anna Aurilli, director of Environment America stated “[this bill] blocks safeguards for the rivers and streams that help supply drinking water to 1 in 3 Americans.” This is a critical issue as water is the basis of survival for all forms of life on our beautiful planet. Allowing cuts to the very agency that is setting out to protect our future, you are not only reducing money spent you are reducing the chance for life to thrive and grow. Instead of making cuts you should be allowing research and funding that can help with the growing water crisis in the United States. To do so, an article by Shannon Shayrn suggests looking into “wasteful flush toilets, non-insulated pipes and generous shower heads” on a large scale-because even small changes can make big waves.

The protection of water should be a number one priority for our government. When talk of water pollution occurs, minds automatically jump to our oceans, while the pollution there is devastating, the issue of water pollution also affects us directly on land in the states. Runoff is a serious threat. As water makes its transition from sprinklers, gutters, and various other forms of displacing water, it picks up pesticides along with numerous other harmful chemicals, then dragging them into our ponds, reservoirs are wells. Greater regulations as to what we can emit as civilians, large corporations- even farms- can prevent a variety of issues that grow as runoff increases. According to “Green Answers,” runoff enhances chances of flooding, and erosion, which depletes topsoil of its nutrients, which seriously harms our agricultural industry.

Another thing plaguing our nation is the large amounts of waste. Regardless of location or the scale this issue is 100 percent preventable and yet it still garnishes our highways, forests, and cities. Unattractive dumping spots put up left and right and large waste treatment plants take away from the beauty of our country sides. our country known for its “mountain majesty” is now covered in litter left by both citizens and large corporations. But this issue is not a recent one. Corporate pollution has been a problem for many years- cutting down masses of trees, creating environmentally unfriendly packaging, and dumping into rivers. even in places as sacred as our nation’s capital. 1960s president Lyndon B. Johnson acknowledged the issue, stating, “The Potomac River is a national disgrace.”

If even our own past president could notice this problem why hasn’t more been done? What do people from other countries think when they see murky brown water filling up with plastic in places that are supposed to represent us? I thought our country was supposed to be a leader, a role model, the best, but if we can't take care of it, what does that say about our society. what will it take to wake up America, to face the ever destructing condition of our mother earth- our home and only home. It is with all my heart that I hope that you sir or madam, step up and become the change both this country and world need. For both future generations and us- be the leader that did something. That made a difference. 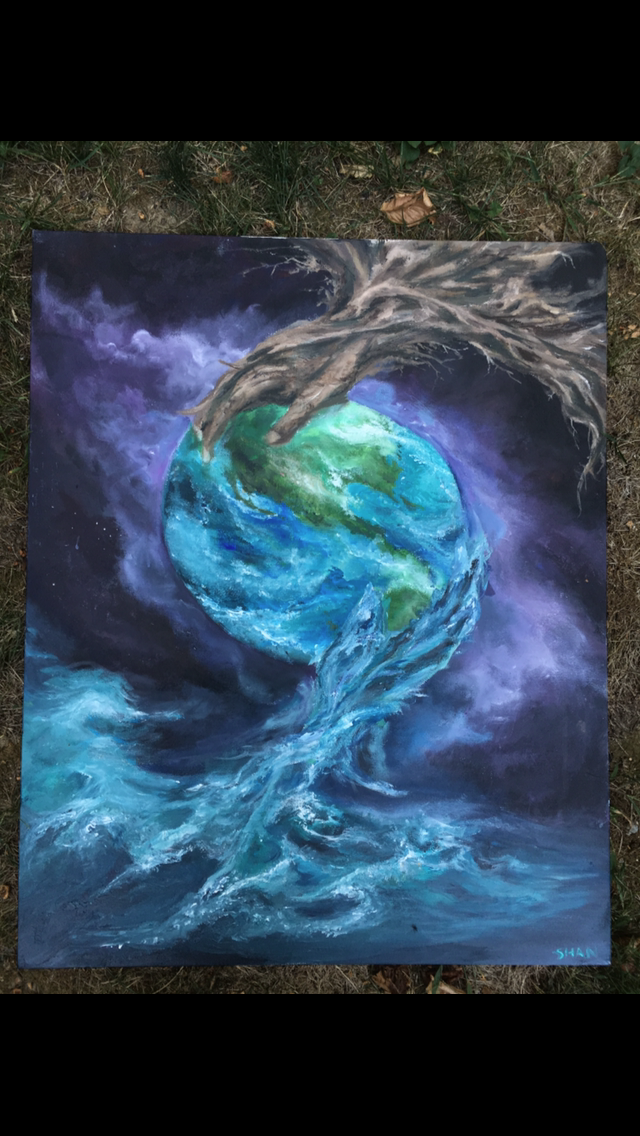 This painting represents the balance  needed in our ecosystem to hold our earth together. When one aspect is neglected, our earth can no longer be supported, thus allowing our delicate mother earth to fall to shambles. It is critical that we help maintain this balance for both the good of our environment and ourselves.

pollution environment
Published on Nov 8, 2016
Report a problem... When should you flag content? If the user is making personal attacks, using profanity or harassing someone, please flag this content as inappropriate. We encourage different opinions, respectfully presented, as an exercise in free speech.
Lewis S. Mills High School

Talking about school safety and how we can keep schools safe.

Oil is Destroying the World

Oil is running out, and we only have a couple decades of oil left. We need to fix this as a country and move forward as a species.