This country is called the land of the free for a reason. People come from all over the world to get the rights and the freedoms that we supposedly have in this country. But are these rights and freedoms actually granted to us? I have always believed the answer to this question is yes, but when I found out that there is a possibility that abortion will become illegal, I had to rethink that. It is not fair to tell a woman what she can and can’t do with her body, or her unborn child. It is civil rights for a woman to have to have complete control over her body.

A huge reason that abortion should be completely legal is because some babies are the result of rape and sexual assault. If abortion becomes illegal, women who have been sexually abused will be forced to have children that will constantly remind them of this horrific event. This is not fair to the women, yes, it's their child, but a child born from rape is a whole different story than a child who a mother planned on having. And according to womensissues.com very few women choose to give their babies up for adoption once they have already had them. They feel even worse giving up the child, so adoption is not an alternative option to abortion.

I can understand how some may think that abortion is murder. However, if you look at the facts, this is not true because abortions take place in the first trimester. According to women's rights activist Linda Lowen, the fetus’ health is completely dependent on the mother, it can not be seen as a separate entity in any way when it is attached by the placenta and the umbilical chord, and it can not exist outside her womb.

Another reason abortion should be legal is because of teen pregnancy. There are so many teens out there who yes, did make some bad choices, but also are not ready to carry out the responsibilities being a parent entails. They also will most likely not finish school and not be able to get an actual job that will allow them to support themselves and the baby. Also a lot of times they won’t have the support of the father, which makes it almost impossible for this teen to take care of this child on her own.

Everyone is entitled to their own opinion, however, abortion is a serious subject that needs to be addressed the correct way. If a woman chooses to get an abortion, she has the right to do so, and that part of this is not a matter of opinion. The rights and freedoms of our country are the reason our country is so great, If we take those away we won’t be known as the “land of the free”, and taking the right of a woman to do what she wants with her body, would be taking those rights away. 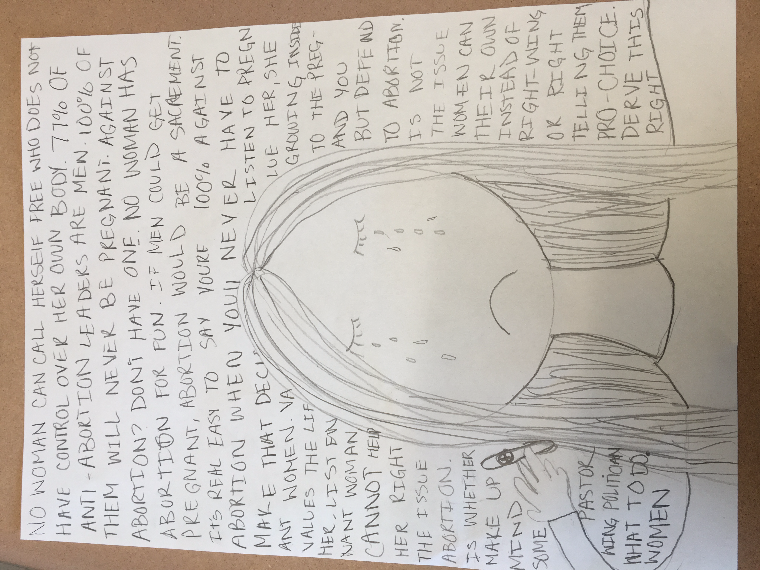 abortion
Published on Nov 3, 2016
Report a problem... When should you flag content? If the user is making personal attacks, using profanity or harassing someone, please flag this content as inappropriate. We encourage different opinions, respectfully presented, as an exercise in free speech.
Lewis S. Mills High School

More than one million animals die due to animal cruelty each year. This needs to stop.

I think abortion is okay in some circumstances. It really just depends. These are my thoughts.

My article is about ending abortion

The Importance Of Abortion

This letter is about the freedom to choose

In this letter, I propose to the president that he should consider making abortion legal in all 50 states.