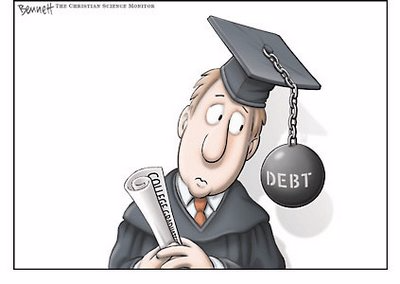 Seven in 10 seniors who graduated from public and nonprofit colleges in 2014 had student loan debt, with an average of $28,950 per borrower. That is $28,950 a college student could be using to pay for a house, a car, or even a family. Instead, students are in up to their necks in college debt. In 2010, student loan debt surpassed credit card payments, and in 2011 college payments went above treacherous auto loans, and in 2012, national college debt hit the trillion dollar mark. Many parents cannot pay for this monster of a fee, and loans overwhelm the students who must take on the debt, and the parents who try to end it. The next generation may be an uneducated one, due to student loans skyrocketing. As the next president, you need to lower student loan debt, for the greater good of education.

To begin, lowering student debt is important because in 2015, national student loan hit the $1.2 trillion mark. Unfortunately, according to USA Today, “40 million people across the United States have monumental student debt, as reported by CNN.” In fact, student loans have “increased by 84% since the recession (from 2008 to 2014) and are the only type of consumer debt not decreasing, according to a study from Experian, which analyzed student loan trends from 2008 through 2014.” This means 40 million Americans are struggling with student loans that they cannot handle. A college student does not yet have a job, yet must get one quickly to pay off his/her loans. It’s not right. If you are just getting out of college, you have not had the chance to gain any experience. Your job may be in Canada, but you can’t afford to get there because of your horrible student loans. Furthermore, student loans interfere with retirement funds. Every dollar one spends on college, one loses 35 cents for retirement, and thus the problem of running dry of retirement money. UWire TexT says “... if you finish college $37,000 in debt like the average recent grad, you will set yourself back almost $13,000 in retirement savings.” That is a lot of money they’re missing. That money could have paid for medical bills, taxes, and so much more. Now you won’t be seeing that money in your salary! Finally, its still rising sharply! You think 1.2 trillion dollars in national debt is bad? According to Targeted News Service, “When this year's freshman class graduates, student loan debt in America is expected to reach $2 trillion.” That's 2 trillion dollars that 22 year olds without jobs must pay. 2 trillion. About $50,000 per student. Do something about it soon, or 40 million kids or more will go without college. An uneducated future president, uneducated police, uneducated congressmen and women. An uneducated tomorrow. Please fix it.

Ultimately, student loan debt is much too high for college students to pay, and lowering college debt is your duty as the next president. The future of this great country depends on the next generation of Americans. If student loan debt continues to rise, that generation will go without college education. As a 6th grader, this concerns me. I may be too young to vote, but I am not too young to know my education, job, and future depends on this. As president, you can fix this. The only question is, will you?

Racial Inequality- Is it tearing our country apart?

Racial inequality is an issue today that is tearing the United States apart.

My letter is about lowering college tuition.

Something needs to be done about the cost of college tuition.

Over the past 10 years college tuition has risen a ton and is starting to become unaffordable.

Many U.S citizens can't go to college, but why?

The financial aspect of getting a college education can be deterring to a lot of teens aiming for higher education. This issue can be dealt with i...

College prices should be eradicated or decreased.

College costs in America need to be reduced.