“ Can you put a price on on educating children? It's hard to measure academic success sometimes but the impact of a great teacher is important enough to increase their pay.” Said by my Father a counselor at a High school. It's imperative that teachers in the United States are more respected. As president, you should work to raise teachers salaries for teachers are the people who educate doctors and lawyers who are the higher paid.

Some Teachers either have to work second jobs or leave their jobs and find ones with higher pay to support themselves and their families. Teachers shouldn't have to have less money to do what they love. Erik Benner one out of many teachers from a high school in Texas has to work two jobs. He says to an article from the Washington Post about doubling teachers salaries that “ Honestly, I am invested and I love what I do, but I am run down and exhausted. There aren't enough hours in the day.” People shouldn't have to live their lives like this just to be able to support themselves. In other countries such as China and India educators are paid and respected almost as much as Doctors and Lawyers.

College Students who would consider being a teacher won't go through with it at times because of the pay. Schools aren't getting the smart and educated people they need to teach their students. The average salary for a teacher starting out is 39,000 dollars a year. Even after 25 years of teaching, a salary can be only 67,000 said by an article from the Washington Post about teachers pay. Teachers salaries have decreased over the past 40 years.

Governors are the people who can fix these problems and some schools are taking action and fighting for their rights as teachers. Teachers in fairfax county VA wore jeans to protest against low pay and high expectations said once again by the teachers pay article from the Washington Post. Some teachers even stopped writing college recommendation letters and in Denver they passed a $25 million dollar bond. Governors can have a big impact on teachers in many ways good and bad. For example Chris Christie, New Jersey’s Governor denied paying teachers more and said they are overpaid. Although in states like Florida, North Carolina,Hawaii, and more, governors are looking to or already found ways to increase teachers pay.

People may argue that paying Lawyers and Doctors are more important than paying teachers, so that's why educators aren't payed as much as them. They think teachers are overpaid and the money should go to something more important. I for one think education is very important and a crucial aspect of every child and adult’s life. Those doctors and lawyers were once educated by a teacher. How come the people teaching the higher paid and respected aren't treated the same? In other countries they are paid and respected just as much. So why not in the United States. I know my parents, who are both teachers and my teachers would apreciate it a lot.

Think of all of the great educators who taught, inspired, and encouraged you throughout your life. College professors, your favorite high school english teacher, or even your first grade teacher who taught you to read. Because of them, you are where you are today, President of the United States . So, I'm asking you to pay back our teachers for all they do and increase their pay. After that, maybe they will be looked at differently by others. 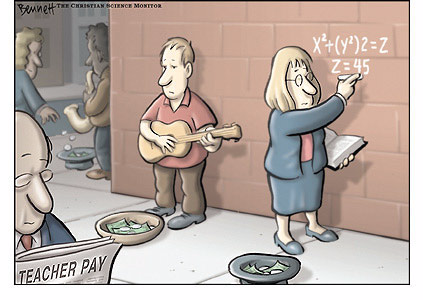 education salary respect
Published on Nov 9, 2016
Report a problem... When should you flag content? If the user is making personal attacks, using profanity or harassing someone, please flag this content as inappropriate. We encourage different opinions, respectfully presented, as an exercise in free speech.
Brielle Elementary

I am against racial profiling

Terrorism is the most important problem facing the United States.

This letter asks the next president to promote the importance of raising awareness and increasing knowledge of mental health on a national stage.