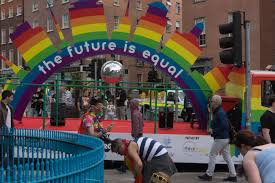 I would like to talk to you about a subject that is really close to me and my family. That issue is the LGBTQ community. Two of my sisters are lesbian and one is bisexual. I also have two gay uncles.

There are issues with the community. Some of the crimes committed against them are hate crimes. There is also a lot of hate speech against them.

Only about four percent of Americans are lesbian, gay, bisexual, transsexual, or questioning.

There are a few reasons I think these happen. One is just a lack of understanding. Another is people having bad experiences with the LGBTQ community. The final reason I think these happen is because people are afraid it is like a disease that spreads.

There are a couple ways I think we can fix this. One is to add a LGBTQ unit in health classes as a mandatory lesson. Another option is to put some laws in place to prevent some of the hate speech.

hate crimes lgbtq rights lgbtq community crimes hate speech
Published on Nov 11, 2016
Report a problem... When should you flag content? If the user is making personal attacks, using profanity or harassing someone, please flag this content as inappropriate. We encourage different opinions, respectfully presented, as an exercise in free speech.
Billings Public Library

Why Hate Crime Laws Should Be Stronger

Nowadays, many people in the United States are victims of hate crimes due to lack of protection from the government. With stronger hate crime laws...

There are a countless number of ways being queer is amazing yet terrifying, so we should make changes so that no one feels hated or unaccepted.

A letter about gay acceptance