To whom it may concern:

I live in Las Vegas, Nevada, and while I love it here, I've been noticing things about the world I live in. We here in Nevada have the worst education standards in the country, and that's a problem, obviously. However, it's more important to realize that it's not not just Nevadan education that is degrading. Over all, all test scores in all of the country we inhabit have been decreasing. So why is it that we continue to not only keep the education laws that are lowering our educational scores, but also add more tests, adding on to the problems already posed by our education system. I wan't to go to college, and I love the fact that people are talking about it in our election campaign, but why is it that nobody talks about the problems in the basic foundation of our education. High, middle, and elementary schools have all been mostly neglected, if mentioned at all by some candidates.

I've seen some other posts on this sight talking about the strict homework they have and the idea that we should not have it. I respectfully disagree. I would say cut down on it, maybe, but not eliminate it entirely. Instead, cut the tests that can prevent students who have had straight A's all school year from getting into the higher class or the class that they want to be in. It's not fair to the students nor the teachers, as the teachers should not have to teach students who have no clue what they are being taught while also having students who are constantly getting high marks above the expected average. There's even cases of independent companies, as they are the one who are in charge of many of the tests, hiring graders on Craigslist and telling their graders too "see more grades as 3's, or 2's." referring too common essay scoring systems. They are telling their graders to be overly critical in an overtly oppressive way. by doing this kids can do well beneath what they probably should have done.

The worst part is, there is a super easy way to help this, Just look at the countries with the highest test scores globally, and copy what they have done. We're currently in 14th place for education according too MBC times. We're beneath Finland, Ireland, Russia, South Korea, the UK and more, and honestly that shouldn't be the case.  We live in one of the most powerful, well known countries in the world, so why cant we be in at least the top 10's for education? We need this to be known, not only By the reader of this small letter I wrote on a webpage for school, but for the entire country, maybe the whole world. We should be able to be proud of our education, instead of slinking and regressing back from 12th place, to 14th, and now heading towards 16. I hope who ever is the president reads this. Because we need you too.

-Thank you for your consideration 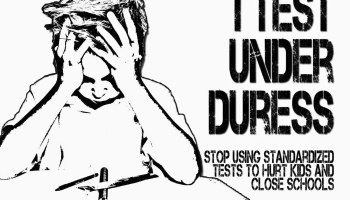 students teachers standardized testing education education reform
Published on Nov 9, 2016
Report a problem... When should you flag content? If the user is making personal attacks, using profanity or harassing someone, please flag this content as inappropriate. We encourage different opinions, respectfully presented, as an exercise in free speech.
Las Vegas Academy

This is a call to action against this illegal act that plagues America.

The Beauty Of Wolves

this is a speech I wrote for people to know about the beauty of wolves.

Dear Future President, I just want to let you know what this title means. I hope you will take this task very seriously. This job is about people...

Overwhelming cost of college. Is it worth it?

this letter is about all the different ways that college can effect the lives of seniors all across the united states and how you can fix the probl...

Will background checks when purchasing a firearm be beneficial?

Gun Violence is a current, significant issue in America.

The Controversial Issue of Guns in America

Help us to address and further solve the issue of gun violence in our country.

Classrooms need to change, in more ways than one.