Right after the first debate my teacher told me I be writing this. I immediately began thinking about what I would say to the two candidates. You may be thinking, “What does a 13 year old know about politics?” This is the first presidential election I’ve been old enough to understand and I’ve really begun to dig into the issues. I’ve formed my own opinions and thoughts on most everything. However, I am influenced by, but also not afraid to go against my family and friends.

Oh, yeah, my name is Camryn, I’m a Kentucky Student, who has been highly in tune with this wild election. I think it’s very important for students, especially high schoolers, to be informed about how our political system works and what each party believes in. This will help them form their own opinions instead of just following their parents beliefs or what the so called “norm” is.

There is this event in my state called the Kentucky Youth Assembly or KYA. It is basically an assembly where you can present bills to the other student participating. You have to go through Senate, Legislators, and the KYA President. If your bill passes all of the levels, then it will be presented to Kentucky Congress. This will be my third year participating, and multiple of the bills I, as bill author, and others from my school have presented, have passed and became real state laws.

This year the bill I, and three others, are presenting is to require high school students to take a political science elective. This will be good for our state because these students will soon be voting and need to know how the system works, I mean how many of them actually know about Electoral Votes? They also need to know what each party believes and discover whether they lean more left or right or not, so they know how to register. The elective will not be biased, and students should not feel pressured to vote one way or the other. It will not be about candidates, it will just be about the system and the separate beliefs of each side. The main point is for students to be educated and form their own opinions. Whether or not they decide in the future to be informed on candidates is their choice, but this course will at least inform them of the basics of our local and national government. 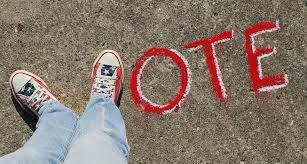 students voting
Published on Nov 8, 2016
Report a problem... When should you flag content? If the user is making personal attacks, using profanity or harassing someone, please flag this content as inappropriate. We encourage different opinions, respectfully presented, as an exercise in free speech.
WaltonVeronaMiddle

Why we should help immigrants and refugees entering the United States.

Why We Must Eliminate Standardized Testing

Students need technology in their school to be ready for the real world.