Terrorism has affected the USA in a big way from 911 to the Boston Bombing. A growing issue worldwide, terrorism, has caused around 130,000 fatalities worldwide between 2006 and 2013 (Statista). Just about every part of the United States has been hit by some form of terrorist attack since 1970 (Brad Plumer). Last year Iraq was named the country most severely impacted by acts of terrorism and they need our help. Terrorist groups try and take Iraq over and say that it is their land and they will try and do that to us some day. I believe that terrorism should be the main priority for you the future president because these terrorist groups are getting stronger and stronger every day and we never know when they will attack next.

We need to take a stand and help the ones that are being affected by this from different places around the world by keeping a 24/7 watch on the threats. We need to work as one to stop this whole thing before it gets out of hand. We need to stay alert at all times because we never know when they will attack. During 911 most people did not have a clue that it was going to happen, but the CIA got confirmation. However the CIA will not include how they got this information in their papers detailing that they knew that a terrorist attack was going to happen. We did not take action soon enough. Months earlier, starting in the spring of 2001, the CIA repeatedly and urgently began to warn the White House that an attack was coming (Chris Whipple). The CIA knew that there were attacks coming and they warned the White House, but president Bush did not take any action until it was too late. We need a president that can stop these kinds of things and a president that can save lives. Another way to help is if we stop selling weapons to other places outside of the USA since we are just helping the enemy beat us at our own game. A new report from a prominent human rights group has found that ISIS has built a substantial arsenal, including U.S. made weapons obtained from the Iraqi army and Syrian opposition groups (CNN Politics). This matters because they would have a difficult time trying to do anything without weapons. If we stop selling them to the enemy then they will have a harder time trying to get them and take us down. Finally, we should keep our eye out and listen to the experts like the CIA in case any attacks would happen and act upon them right away and stop selling our weapons outside of the US where are enemies are.

Some People don't think terrorism is that big of a threat and that is wrong because some day if we don't keep watch on the enemy they will strike when we least expect it. This can be a major downfall to our country. We need to spread the word to these people and get them thinking that terrorism is a bad thing and it can destroy our country if we don't end it soon. In this paper from Jeffrey M. Jones and Joseph Carroll it states that sixty-seven percent of Americans are satisfied with the way things are going in the United States, which is the highest percentage since January 2000. People in the US don't think that terrorism is a major threat and that is a bad thing because they can take us down if we don't take our protection seriously. Finally, I think you our future president, should spread the word to the people that don't really care about this subject because down the road it will really affect our country as a whole.

We need to continue with the CIA strategies. We need to figure out when something bad is going to happen. We need you to act upon it right away. Another way is to not sell weapons outside of the US. I think peace and justice is a good global goal that represents this topic because we need to bring those people to justice that make our country a bad place if we want peace in this world and in our country. This connects to the UN because they try and protect different parts of the world and we need to protect the world also by stopping these attacks before they happen. We would help the UN because these attacks would stop happening. Also the UN wouldn't have to fight them alone anymore. This matters because if we don't help this world it will never be the same again. This should be the next agenda for you because our last president didn't really help this cause. If you keep our country safe from terrorism then hopefully the next presidents will also. Those who threaten us will never think about attacking the U.S. again. Think about how many lives we will save. In this map you see below we are not the only people that need help. We have to make a change and help other countries come together as one to stop terrorism. 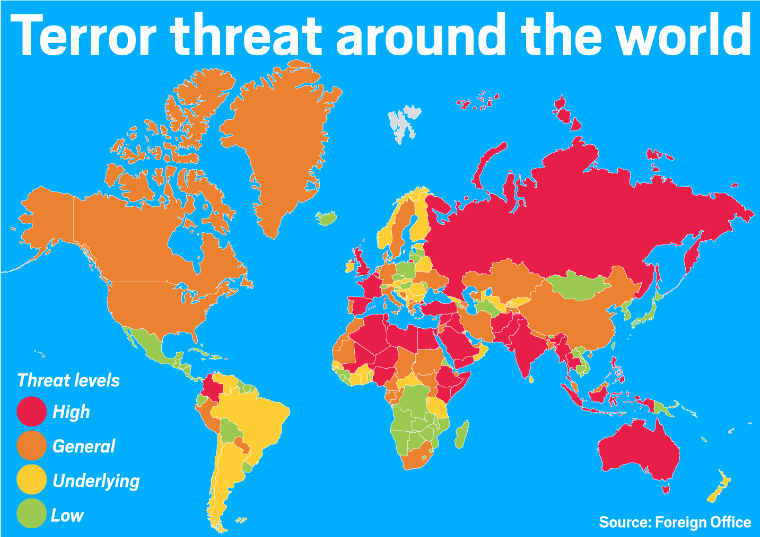 terrorism
Published on Nov 9, 2016
Report a problem... When should you flag content? If the user is making personal attacks, using profanity or harassing someone, please flag this content as inappropriate. We encourage different opinions, respectfully presented, as an exercise in free speech.
Chaska Middle School East

The age of being considered an adult needs to be changed.

Currently, the age for becoming an adult in the U.S is 18. When you are 18 you are usually still a senior in highschool and your brain is not yet f...

We need to put a stop to terrorism.

Defeat terrorist cells across the world instead of allowing them to come to our land and kill civilians.

How many people will have to die

Terrorism is rapidly killing and threatening us. Fear for terrorism is tearing through our country like plagues, separating our countries. Death ...