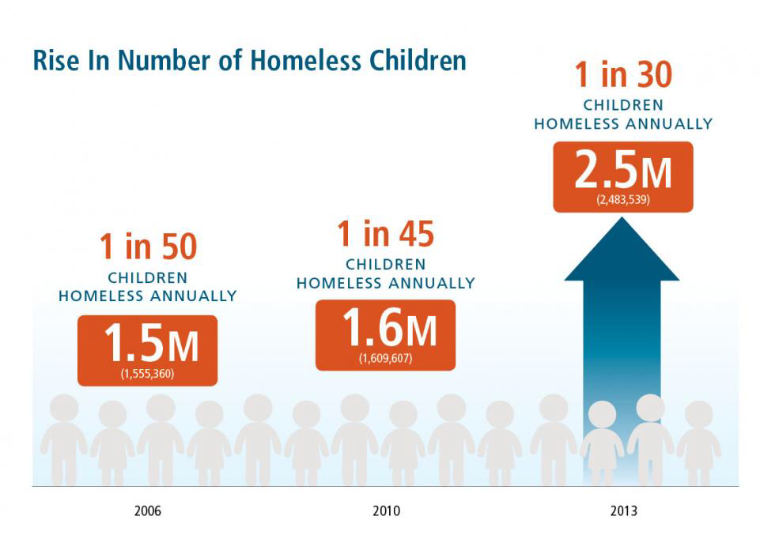 Imagine being 6-17 years old again but, now imagine homeless at that age. Struggling to find something to eat or even a place to go to sleep. Can't imagine it right? Well it's happening right now somewhere in the us. “1-30 children in the US were once homeless a time in there life. .” Since 2006 the rate in which kids became homeless started going and it's higher than ever now.

“13 kids die on the street everyday(Stand up for kids org).” This rate needs to be lowered and ended. With an increase of 8 percent in just a year, the number of homeless children have reached an all time high(ziv). According to a comprehensive state-by-state report that blames the nation's high poverty rate, the lack of affordable housing and the impacts of pervasive domestic violence.

“We need more affordable housing or we need to pay people $25 an hour," she said. "The minimum wage isn't cutting it.” The start in solving this problem could be to establish more homeless shelters and more honest adoptions. More attention needs to be brought to this and the government needs to take charge as soon as possible.

teenhomelessness teens us citizens philadelphia
Published on Dec 14, 2016
Report a problem... When should you flag content? If the user is making personal attacks, using profanity or harassing someone, please flag this content as inappropriate. We encourage different opinions, respectfully presented, as an exercise in free speech.
Cristo Rey Philadelphia High School

Gender Inequality - Unequal treatment or perceptions of individuals based on their gender.

This is an issue that can affect many young people. The next President of the United States should create laws to allow transgender teens to use ba...

This is about immigration issues in the United States.

Mental health needs to be spoken about in this country.

Give the Students a Say in Their Education

According to Edudemic, letting students choose the topic they want to learn about can cause less stress on a student and make them happier and more...

When teens get pregnant there first reaction is to get a abortion because they feel like their in this alone, they're not ready to care for one yet...

This border has caused many problems before and it will continue to cause problems in the future for both of these countries. We need to solve thes...