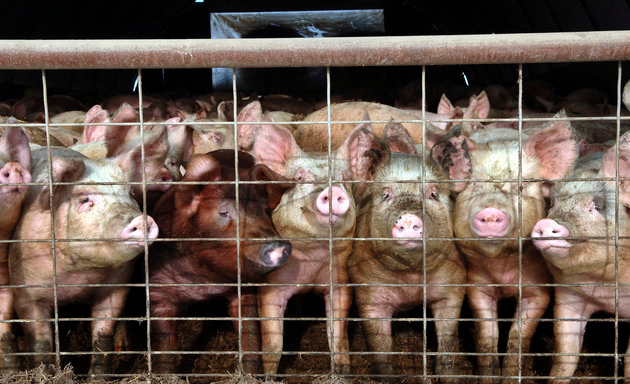 Our country has a major problem with factory farmed food and we need to make a drastic change in the way we eat and where we buy the food that we eat. Of all the animal products produced for consumers, 98% are factory farmed. The idea of “Old McDonald farms” where animals roam in green pastures is long gone. Now, there is an array of negative affects that factory farmed food produces and not only does factory farming degrade the animals, it has horrific effects on the environment that we live in, the workers are put in dangerous situations, our economy is depleted of its money and resources due to overspending on meat production, and we, the consumers, are also harmed due to overconsumption of antibiotic-pumped animals and the dumping of the animal’s feces into the environment.

As I am sure you know, there are no laws currently in place that protect the rights of animals and the way they are treated during their time in “farms” and slaughterhouses. The animals live their whole lives in cooped up pens and are often mutilated. For example, even in “cage-free” chicken coops, the chickens are crowded together, debeaked, and most often never see sunlight until they are transferred to the slaughter houses. Cows, too, are forced into appalling circumstances: they are held in holding pens that are filled with their excrement and they are forced to eat and sleep in these small pens, the cows are castrated and dehorned without any anesthetic, and are pumped with antibiotics and growth hormones. Not only are they physically abused, but they are emotionally/mentally abused. Whether you, Mr/Madam President, believe that animals have feelings or not, it is undeniably true that all mother animals care for their offspring and have a bond, but in factory farms, the offspring is taken immediately away from their mother while the mother spends the rest of her life producing milk, which she can only do after giving birth. Her life is then ended in a dirty slaughter house with no peace of mind. No living creature should have to endure these conditions.

While I hope that reading all the abhorrent facts about the way these factory farmed animals are being treated, that is only a small portion of why factory farming should, if not become illegalized, follow strict guidelines on the way they farm.

Mr/Madam President, my hope is that you care deeply of the state of our environment, and if not climate change, then I hope dearly that you care about preventing all the other scientifically proven negative impacts farming has on our Earth. Factory farming produces over 130x more excrement than the entire U.S. population, and if that doesn’t disturb you, then I hope this does: almost all of it is stored in giant–as in the size of three football fields– “manure lagoons”, according to the www.ffacoalition.org. Not only is the manure stored in these “lagoons,” but in order to drain these, the manure is liquidized and sprayed all over neighborhoods and surrounding areas around the farm. http://www.sustainabletable.org/ tells us that this causes health problems for neighboring residents due to exposure of ammonia and hydrogen sulfide. Health problems include “developmental deficiencies in infants... spontaneous abortions...and possibly cancer” says the Environmental Protection Agency, (EPA). Also, it pollutes the waters causing the death of different necessary organisms and significantly reduces biodiversity, and this releases 20% of the leading causes in greenhouse gasses. So not only is factory farming inhumane towards animals, but our world is also being deteriorated by these mass productions of meat and animal products.

Aside from animals being directly affected, along with the environment, the workers in these farms are constantly put in extremely dangerous work environments on a daily basis. These work conditions are not only dangerous due to many kicking/bucking animals and highly dangerous/unreliable machinery, but they have to work in disgusting conditions where they are exposed to harmful gasses and bacteria: ammonia, methane, nitrogen sulfide, and carbon dioxide. Many workers also develop post-traumatic stress disorder (PTSD) due to watching animals be brutally tortured and killed on a daily basis, but these workers can’t afford therapy or medication because they are poorly paid.

Lastly, out of all the topics I have mentioned so far, I am positive that my concluding concern against factory farming is what you Mr/Madam President will be most concerned about because it has to do with our economy. America alone spends almost $300 billion each year for the meat industry alone, according to www.theatlantic.com; $300 billion does not include any animal based products either, for example: eggs, milk, honey, clothes, etc. With this abundance of money, the government could fix many other problems that our country faces and it could be used to better our society. We could put this money into the workers of this country who work so hard for such little pay and into inner-city schools; we could put more research into physical illnesses and mental illnesses.

As the steward of the The United States of America, it is ultimately in your hands to initiate change. We the people can protest, cut back on animal products, but, with all do respect, if you do not instill laws to put strict regulations on these farms, than we the people do not have a say in how these factory farms run their business, which is all it is: a business. There is no thought put into the future of our economy, environment, and people.

So I strongly urge you Mr/Madam President to reconsider the laws, or lack thereof, concerning factory farms. It is now left up to you to make the final decision on how to make our country efficient without cutting back on necessities.

Thank you for taking time out of your busy schedule to thoroughly read this highly researched letter. Thank you for all that you do to make this country the greatest country in the world.

A concerned citizen of the United States.

economic disaster animal cruelty environment farm animals health
Published on Nov 7, 2016
Report a problem... When should you flag content? If the user is making personal attacks, using profanity or harassing someone, please flag this content as inappropriate. We encourage different opinions, respectfully presented, as an exercise in free speech.
Judge Memorial

The United States as a whole should strive to work together to keep our oceans clean, and with your help, we as a nation could finally make that ch...