Everyday when I scroll past my news app, or pass by the TV in my living room it seems that two ‘issues’ are being reported; refugees and immigrants. These ‘issues’ come unavoidably into my life with fire and fury from all sides of the ‘issues.’ These ‘issues’ are more than just issues that we talk about from our screens, they are people chasing the same dream you, me, and those before us have sought. These people come from backgrounds full of unspeakable horror; yet still their individual stories involve a common thread with you and I’s story; the American Dream-a dream that better opportunities are within reach, and that we have basic human rights. Yet, despite our common threads, every day we call them issues and refer to them in generalities and numbers with roots in rhetoric.

The UN Refugee Agency estimates that every minute there are 24 people forcibly displaced. These people are displaced because of the hostile world atmosphere-the Syrian civil war rages on, persecution continues in many areas, and unrest is building; all while we watch the agony of bombs, destruction, and tiny children with horrifying wounds from our living rooms. Over this summer alone over 130,000 Syrians sought refugee status in Europe, and still more Syrians are desperately trying to escape the turmoil in their homeland, each trying to reach a better, more peaceful life (Warner).

Meanwhile, the line to legally immigrate into the United States has grown to over 4.4 million people long; a line that could take 20 years to process (Carrero). That means that everyday 4.4 million people fervently anticipate the day they’ll have limitless opportunities in the US, but their Visa never comes. So many of these 4.4 million are in desperate situations of poverty and violence, and just want a chance at the American Dream.

One could argue that the number of unauthorized immigrants is too high to even start to consider giving more Visas; after all, Pew Research Center estimates that there are over 11 million unauthorized immigrants in the US at the moment. Why should we let more people in when these people are here illegally? Unauthorized immigrants are here for the same reasons as any immigrant; they want to chase the American Dream of prosperity, and escape the struggles of their homeland. Waiting the 20 years to get a Visa often means an immigrant’s children will have become adults, and thus missed a chance at a better life; or that there is no longer a way to escape the issues they’re fleeing.

On my many trips through my living room I’ve heard two basic arguments touted against accepting immigrants or refugees; security and the economy.

While we don’t know who is walking into our nation (we don’t even know what homegrown threats are present, honestly) and what security threats they may pose; allow me to assuage some of the fear. Recently, Germany’s Interior Minister released data showing that the refugees in Germany have not caused the German crime rate to increase. Both refugees and immigrants have lower crime rates because they fear losing their opportunities in their new nation, and the majority are fleeing the same people we’re afraid they may be. Most immigrants and refugees have no intention to be criminals. Why deny them the chance at a better life because of a tiny minority that may be among them?

Secondly, the argument that immigrants and refugees steal away native born jobs has no basis in fact; a National Academies of Sciences, Engineering, and Medicine report released this year found that over the past 20 years immigrants have not caused native born wages or employment rates to decrease. In fact, immigration was found to boost economic growth, entrepreneurship, and innovation throughout the US. Many immigrants and refugees come with the spirit of entrepreneurship America needs so badly, and thus boost our nation.

Sir/Madam, this issue isn’t about the numbers, it’s about the people. Too often we get caught up in the stats and forget that there are human stories behind each and every single number. There are literal millions of people that weren’t as lucky as you and I were to be born in a nation that feeds prosperity, freedom, and basic human rights. Every person who walks across the border, or swims across the sea is a person desperate for a life you and I take for granted

Our nation was founded by first and second generation immigrants; Franklin, Hamilton, and Jefferson, making the United States a nation with a long tradition of being a place of refuge. The only reason the United States exists is because someone decided to immigrate to a better place to make a better life. Why break this time honored tradition because of fear, especially when our fears aren’t validated by true data?

Mr./Madam President, as you make decisions over the next four years I implore you to remember the American Dream; innovate in favor of those who aren’t as blessed as you and I. Hold the American Dream in mind as you reform systems, resolve conflict, and make the US a place where everyone is able to make a better life. Remember that every person in your nation has a story, and that every person knocking on our nation’s door has a story of equal value. Let’s all learn to speak to each other as fellow humans-not data points-and allow the rhetoric to live in the past. 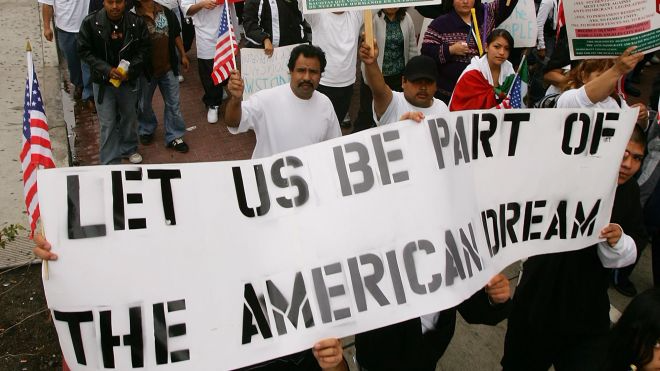 immigration refugees rights
Published on Oct 4, 2016
Report a problem... When should you flag content? If the user is making personal attacks, using profanity or harassing someone, please flag this content as inappropriate. We encourage different opinions, respectfully presented, as an exercise in free speech.
PSD Global Academy

What are you going to do to save our environment?

Immigration has been in our lives forever. Future presidents want to do something to get rid of undocumented immigrants but how do we stop them.

High College Tuition Is Taking Away Our Dreams

Universities' high tuition is ruining the lives of students in the United States.

On average, it takes 21 years to pay off student loans.

The cost of college tuition is a controversial topic. Many argue it would be better to provide the fist four years of college free, but others argu...

This letter shows the problems in the criminal justice system and how we need to change.

We need to stop illegal immigration.

The issue of immigration

Immigration is good and bad on many different levels. This are some of the good features of immigration.

Our efforts to push out illegal immigrants have been unsuccessful. We need to take action.

some people don`t deserve to be deported?

A letter to the future president addressing concerns with immigration.