I am a citizen. I was born in this country, as were my parents and their parents. I’ve never struggled with moving to a new area. I have never been discriminated on based on my race. In other words, I am privileged. Years back, I took a practice Citizenship Test and passed by one point. But I am not blind to the struggles of this country and its people. The history of the US Immigration Reform is messy and complicated, few legislations have actually done good for the country. But now, we have a chance to change that. The 2016 Presidential Election is a mark of great change, a time at the cusp of progress. We need to act now, with a substantial, concrete Immigration Reform proposal which will do its job.

The first action that need to be taken is to repeal the three-and 10-year bars, a legislation which frankly, makes no sense. As you know, marrying a US citizen entitles someone to a green card, however, they must leave the country to attain a green card abroad. Once they leave, they are barred reentry into the US for three or 10 years. This unjust legislation needs to be repealed. With it, allow applicants who entered as minors to adjust status within the US. More often than not, minors came to the country with their parents, and may be uninformed about their home country, they may not even speak the language. We should not force kids to return to a place they don’t know if it means separation from their families. These are kids who have spent great amount of times in our borders, kids who grew up alongside yours and kids who are a US citizen in every regard except where they were born. My questions are these. How did the three- and 10-year bars plan to improve national security? And what is the significance of three and 10 years?

We must uphold the DACA and the DAPA, executive actions taken by President Obama in 2012. The DACA (Deferred Action for Childhood Arrivals) and the DAPA (Deferred Action for Parents of Americans) are reforms finally taken in the right direction. And even if you disagree, it is your duty to this country to uphold this, for human rights. Do not take this lightly. Just this legislation alone has the power to affect more than 4 million people. By continuing on the actions of another, we can help keep families together. Families who live and learn and work right beside our own. To repeal the DACA and DAPA would be to take a step back, in the wrong direction. It would divide families, families, who have lived here for a great many years. It would show American people their representatives are closed minded, and only see this country as one who should have closed borders.

A major issue of this election is in the debate of Syrian refugees. In August of this year, the US accepted it’s 10,000th refugee. We can do more. I understand there are fears of terrorism and a desire to protect national security. But is preventing Syrian refugees really preventing terrorism, are these people fleeing war looking to start it up in a country which has offered them a home? The truth is that, 58% of refugees admitted last year were children (Goyette, USA Today). And I don’t know about you, but I can’t see how kids seeking safety pose a threat to national security. And refugees are placed into intense screening during the application process, and both the CIA and the FBI conduct extensive background checks throughout this process. So, your fears shouldn’t be that the people entering are terrorists. Because they aren’t. I understand concerns about how this influx of people will affect local economies such as job markets and salaries. Now that makes sense. But a proposal placed by a candidate to deny people access based on their religion and background is not only unconstitutional, it is racist. As the next president, you are not just a politician. You are someone who wields great power who must uphold the values we share.

This is a nation of immigrants, and many people seem to forget that they would not be here is there ancestors hadn’t moved here. As long as the American Dream, or just a fraction of it exists, then the desire for a better life will not dissipate. So, the goal cannot be to prevent further immigration to the US as this is illogical, but how to deal with incoming people to our nation to better improve our national security, economy, and how we, as citizens can be aware of the privilege we process and use it for good. 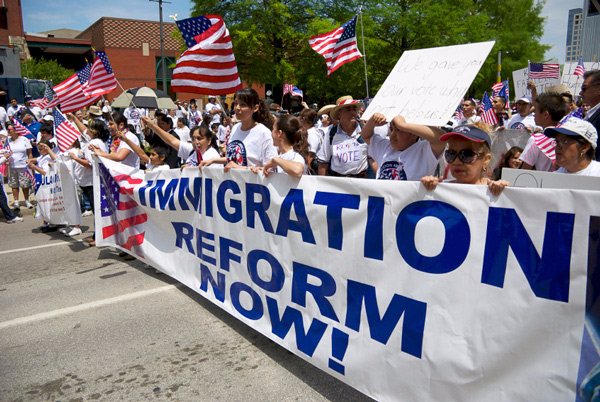 immigration refugees Racism family
Published on Oct 5, 2016
Report a problem... When should you flag content? If the user is making personal attacks, using profanity or harassing someone, please flag this content as inappropriate. We encourage different opinions, respectfully presented, as an exercise in free speech.
PSD Global Academy

The person holding the gun is the problem, not the gun itself.

Post-Secondary education is becoming more in demand, people need to adapt to the change and efficiently increase knowledge and motivation.

Is Standardized Testing really needed? Is it doing more harm than good? Do we put students through more than they can handle for no reason?

College tuition costs are much too high, but will lowering them really help?

A Women's Fight for a "Taxed-Free" Necessity

Illegal Immigration Problems In the US

Problems with illegal immigration in the US.

Even though people think that illegal immigrants are bad, they do help are our economy.

Thinking about problems of immigration that America is facing in real. Need of taking action with specific plans.

Hello future president, my name is Sean Rodriguez. I am from West Milford, New Jersey, and I attend West Milford High School. I would like to speak...