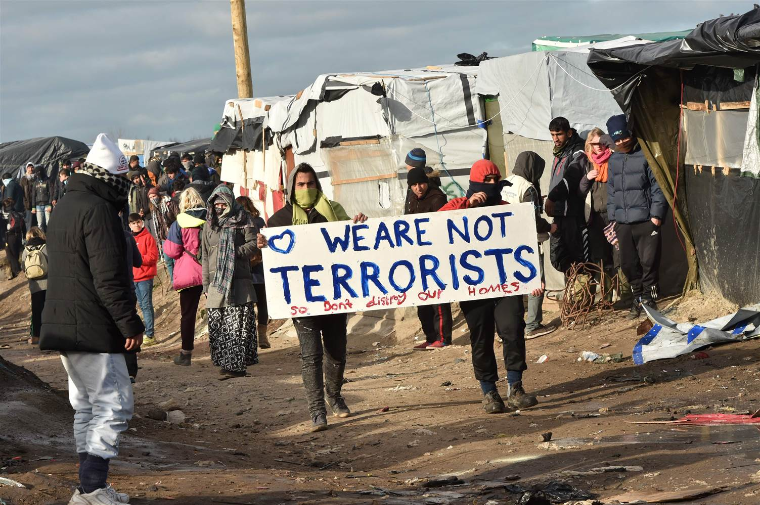 Presently in our country, there is a major cause for worry. Not terrorism, not cyber-security breaches, not a threat of war, nor illegal immigration. There is a domestic threat, one which has been thriving in our country since its very founding. One which could easily cause the downfall of our nation. For centuries, it’s been working behind the scenes to wreak havoc and bring about chaos and devastation. It is the mastermind behind slavery and the Japanese internment camps; injustice.

Nearly every American has faced this problem at least once in their lifetime; most spend their entire lives facing it. One of the most prominent forms of this injustice is the treatment of Syrian refugees, desperate people who come to our country seeking asylum from their war-torn homeland. Despite being admitted into the country, it is done with an air of trepidation and extreme caution. Then, once admitted, most if not all, are treated with hatred and hostility by its people. There is an innate fear that these people are secretly terrorists, sneaking into our country to destroy our infrastructure and collapse the nation, but this fear is senseless and baseless, with no actual data or facts to back it up.

As of 2015, in the 14 years that America has been admitting refugees, 784,000 refugees from around the world have been resettled (Russell Berman,The Atlantic). Of that 784,000, only three have been arrested for activities concerning terrorism. Three. That’s not even close to a single percent of the population; 0.0003% to be precise. None of the three were Syrian, nor were they even close to orchestrating an attack on American soil. Two of them, both Iraqi refugees, were arrested under suspicion of conspiring to support a terrorist organization, and the third, an Uzbek refugee, was arrested for suspicion of conspiring to support a terrorist organization and for planning an attack, but the latter charge was dropped due to lack of evidence.

The screening process to gain status as a refugee in the United States is extremely rigorous. It begins with two interviews with the United Nations agency that deals with immigration, then moves to at least three checks with separate government databases; the State Department, the DHS, and the FBI. Then, if there’s any cause for worry, their files are moved to the National Counterterrorism Center, where they have several more interviews with overseas DHS officers (Kathleen Newland, Migration Policy Institute). On top of this already rigorous screening process, candidates are pre-screened prior to the selection process to admit the candidates who are least likely to be involved in terror activity (Lavinia Limon, U.S. Committee for Refugees and Immigrants). This process takes an average of two years. There are much easier, faster ways for terrorist groups to get terrorists into the country than to claim refugee status.

So why is there such a massive fear that all these Syrian refugees are terrorists? What can this claim be based on? Should I believe that because of the actions of less than half of a percent of the admitted population, every refugee should be treated as a threat? Does the statement of “...give me your tired, your poor, your huddled masses...” only apply to certain people? Who does the promise of “...life, liberty, and the pursuit of happiness...” or the pledge of “...justice and liberty for all.” really encompass, then?

There are concerns about the effect of the refugees on the economy, but these even, are not valid. While there is evidence that the initial impact of relocating the refugees could be costing to the economy, the influx of new citizens, each with spending power, quickly rebuilds and often exceeds, the lost funds. Immigrants and refugees are also much more likely to start new businesses, which also build the economy. Countries like Turkey, Lebanon, and Jordan, each which have received the majority of Syrian refugees, are experiencing economic growth. The Turkish economy is estimated to expand by 3%, Lebanese by 2%, and Jordan by 3% also (John Cassidy, The New Yorker). These countries have accepted the largest numbers of refugees, and it’s actually been benefitting them. So what’s to say that the United States doing the same wouldn’t have the same effect?

Injustice isn’t strictly a refugee problem though. American citizens, men, women and children, born and raised in this country are targets as well. For something as simple as their race or their religion. A 35 year old woman was set on fire on Fifth Avenue in Manhattan. The reason? She was wearing a traditional hijab. Hate crimes like this one are senseless and immoral. As the sixteenth president of the United States, Abraham Lincoln stated, “A house divided among itself will not stand.” We are dividing our house, Mr. or Mrs. President, every hate speech, every slur. Every race, religion, gender, or sexual orientation based hate crime or stereotype that is perpetuated in this country further divides the house of our nation. If this problem is not addressed, the country will revolt, and there will be no healing the divide. So it’s up to you Mr. or Mrs. President. It’s up to you to reunite the country.

islamophobia refugees syrian refugees immigration
Published on Oct 4, 2016
Report a problem... When should you flag content? If the user is making personal attacks, using profanity or harassing someone, please flag this content as inappropriate. We encourage different opinions, respectfully presented, as an exercise in free speech.
PSD Global Academy

How free schooling won't work for the US.

The Need for Lower College Tuition

We need lower college tuition in order to proceed on to higher education from high school.

A ban needs to be placed on horse slaughter to stop the pain these innocent horses are put through.

All people should have the right to attend college at a low cost because they are capable of learning something new every single day.

Trump and the Wall Situation

A letter for Donald J. Trump. If you're not Trump, do not read this letter. (unless you just wanted to know.)

College tuition is increasing, leaving students unsure of their educational and vocational future.

My essay is about how we should allow people to come into our country so that they could live a better life if that is what they desire.

Reasons we must stop illegal immigration.

The Positives of Having Immigrants in Our Country

People who immigrate to the US should be given the opportunity to become legal because they are trying to have a better life for them and their fam...