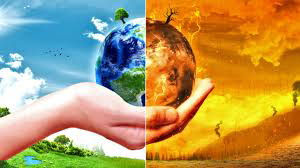 As real as climate change is, many people I’ve encountered both in real life and on the internet seem to like to deny that this issue is, in fact, an issue. It makes life a little more inconvenient, because it means that the people of this earth will actually have to make a change in their lives.

Global warming is causing many things in our world to change, and the largest changes have happened all within the last decade or two. For example, the sea level has risen about 17 centimeters in the last 100 years. This isn’t the scary part, though. In the last decade, the amount it has risen is actually double than it had been in the last century. Another example is the global surface temperature rise. Since 1981, the Earth has experienced the twenty warmest years.

If these changes and more continue, this will cause damage to Earth in the future. The Ecosystems––animals and plants–– will be affected. The growing season is changing due to the fact that seasons are changing at a different pace then they naturally would. This affects migrating animals since they will start to have to look for food earlier rather than later. Bees are also affected, because this is causing them to be out of synch with plants and trees. This limits the survival of bees and plants, which would cause the availability of food to be limited as well. For all of the bug haters of the country, this next one will be scary. The winters are becoming shorter and milder, causing them to be unsuccessful at killing dormant insects. In result, the risk of large infestations in the succeeding seasons is increased. People will experience the most affect. Those in underdeveloped countries don’t have access to the resources to readjust themselves for climate changes. Infectious diseases will start reaching other parts of the world as well. Storms––rains and hurricanes–– will become more intense which will lead to flooding, loss of housing, and loss of life.

There are many things that humans can do to reduce climate change, and the help of the next president is needed to bring light to these issues and inform people on what they can do to help. Recycling is a large one. This helps reduce waste, which in result helps save carbon dioxide––a huge cause of global warming. Although exercising is healthy and will help with the obesity in our country, simply running, walking, or riding the bike to a friend’s house, work, school, etc., will help reduce carbon dioxide as well. The less time one spends in the car, the more carbon dioxide they save. Animal agriculture causes climate change as well, and the only change humans can really do to help this is by going vegan. A meat eater has about 3.3 carbon dioxide emission under their feet. A vegan has less than half of that, with 1.5 carbon dioxide emission.

Climate change is scary, and real. The American people need a leader who will inform them about what will happen. They need someone they can trust, or else they will continue thinking it’s just a sham. Climate change needs to be noticed, and something needs to be done.

climate change animal abuse
Published on Oct 19, 2016
Report a problem... When should you flag content? If the user is making personal attacks, using profanity or harassing someone, please flag this content as inappropriate. We encourage different opinions, respectfully presented, as an exercise in free speech.
Benilde-St. Margaret's School

The federal government should raise the national Minimum Wage.

There are millions of homeless teens in the United States, and it is a very large problem that is going unnoticed. Actions need to be taken.

This letter is requesting your consideration on the reduction of the military spending or considered and well-thought out spending.

Mr.Trump is the next president-elect

Animals shouldn't be in captivity. Instead they should be in their natural environment and not locked behind glass or bars.