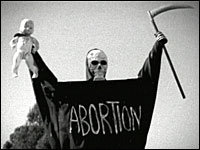 Congratulations on being elected president. I hope you fulfill your duties well and do not let this nation down. There are many issues which need to be addressed in our country at the moment. I believe one of the first tasks that you, as the president, should accomplish is banning abortions.

Michael is my unborn brother. While my mother was pregnant with Michael, the doctors told her that they could not hear a heartbeat. The doctors, because they did not have the knowledge nor the resources to deal with a mid-term death, sent my parents to another clinic. When they arrived at this unfamiliar clinic, my parents were left in the dark of where they truly were. While sitting in the waiting room, filling out paperwork and hearing the conversations around the room, my parents realized where they actually were: an abortion clinic. At that moment, my mother rushed to the counter and inquired about the place. Heating up and causing a scene, they took my parents into a private room to discuss the issue with a doctor, who told my parents that their intentions were to remove the baby. My mother, however, was not comfortable having her baby taken in a room which was adjacent to a room in which a baby was being killed. The doctors would not listen and said that it had to be done as the other doctor’s office did not know how to remove a baby.

Abortion is a horrendous act; it should be completely illegal. Abortion is killing a child: a human being. Why is it, that murder is illegal, but abortion is not? Both are killing innocent human beings. If murder is against the law, so should abortion be. It is not the baby’s fault if the pregnancy is seen as an “accident”. Why should the baby suffer and give up his/her life because of the parent’s “mistake”? That is not right. A child of a criminal does not face punishment for his/her parent’s evil doing; so, why should a blameless baby suffer, with the termination of his/her life, for a crime he/she did not commit.

Abortion is an unlawful killing of a harmless, innocent baby. Because of this, abortion should be illegal. Abortion is a cruel act that should not be allowed in this great country. If everyone is as truly free and equal, as our country claims we are, then, these babies, who have done no wrong, deserve the chance to live and prosper in life, just as much as any other human being. Even more so, parents who do not want to give up their child should not be tricked into such cruel acts. Because of these reasons, and countless others, abortion should be illegal and be on the top of your list of priorities as president.

abortion prolife
Published on Oct 18, 2016
Report a problem... When should you flag content? If the user is making personal attacks, using profanity or harassing someone, please flag this content as inappropriate. We encourage different opinions, respectfully presented, as an exercise in free speech.
Benilde-St. Margaret's School

Dear Mr. Trump, as of now you are our leader and president. We all will look up to you now for our protection and unity as a country. I think a ser...

The cost of college tuition needs to be lowered for students to be able to afford going to school.

Gun control needs for our next president

The future president will need to be doing more to resolve the issue. Background checks and other strict laws need to be put in place before our c...

We need to do more to prevent bullying because it affects victims’ school achievement.

In this letter I have composed several issues that America faces today. This includes the lack of respect towards rape survivors and the debate ove...

Abortion should be legal in every state in The U.S.

Why abortion is wrong.

We need to stop an ongoing problem in our society; abortion.

Even though women have rights, its not right to kill a kid.