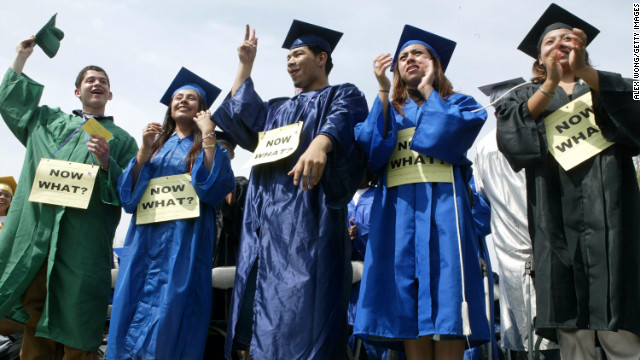 Every student deserves an education. Something that is being taken away from many undocumented students living in the US. Federal aid is not an option for them. Many of these students have to interrupt their education due to their economic situation. College is expensive even for the richest of our country.

According to the American Immigration Council approximately 65,000 undocumented immigrants graduate from American high schools. Many whom have excelled and are hoping to go on with their dreams. Dreams that are put down as they are denied financial aid and in some occasions of college acceptance—for not having legal documentation.

An example, Larrisa Martinez. She was the valedictorian for the 2016 graduating class of McKinney Boyd High School in Texas. As she was giving her speech she declared that she was illegal in the United States. Many people applauded and gave her a standing ovation, but what we saw in the news was different. Everyone was questioning if she should be granted the full ride to Yale or not. Some even threatened and harassed her via e-mail, mail and other connecting resources. Why? Only because of her immigration status. Did we ever hear about how hard she worked? About her abusive father? Maybe even how courageous she had to be for her to announce something personal during her valedictorian speech.

Our country needs to give every student the same educational opportunity. How are students expected to excel, and fill the financial gap if our country constantly throws obstacles not only financially, but discriminatory.

So what are you going to do in order for every student regardless of their legal status to obtain an education? Challenge the law by changing the policy to allow everyone to obtain an equal education.

By Historical Standards, DREAMers Are Different from Most Nonimmigrants. They Will Not Apply to Come to the United States from Their Home Countries. They Generally Have Few Ties to Their Home Country, Have Little or No Intention of Moving Back Permanently, and Have Every Hope and Desire of Becoming U.S. Citizens. A Status Tailored to These Unique Circumstances Would Likely Be Significantly Different from Existing Nonimmigrant Categories. Unless the Law Is Properly Drafted and Coordinated with Existing Laws, It Could Become Significantly Difficult to Leverage Nonimmigrant Status into the Fairly Narrow Opportunities for Adjusting to Permanent Resident Status under Current Law. "A Comparison of the DREAM Act and Other Proposals for Undocumented Youth." American Immigration Council. N.p., 2016. Web. 17 Oct. 2016.

Education Costs immigration education
Published on Oct 18, 2016
Report a problem... When should you flag content? If the user is making personal attacks, using profanity or harassing someone, please flag this content as inappropriate. We encourage different opinions, respectfully presented, as an exercise in free speech.
Benilde-St. Margaret's School

My letter is about how we need to stop our country from going into deeper debt by only paying for social security for the people that need it and t...

Is deportation or building a wall really necessary?