Our country is currently in a state of turmoil. This past election has caused political polarization to infect our communities, local governments, and our nation’s capitol. Analysts across the country are predicting it will take certain political parties not only years, but decades to recover from the damage certain candidates have bestowed upon their party. It is going to be your duty, as President of the United States, to reunite this broken country. It is going to be your duty, to fulfill all of the duties of President while simultaneously ensuring the state's’ domestic tranquility. It is going to be your duty to continue to aid our allies is foreign conflict but to always remain mindful of the work still to be done in this one.

The number of pressing issues at hand cannot be ignored. There is health care to reform, immigration legislation to be passed, Supreme Court Justice positions to be filled, a war on terror to win, foreign leaders to keep in check, racial discrimination to eliminate, a justice system to recreate, international trade deals to negotiate, a national deficit to eradicate, communities to be made safer, homeless people to be sheltered, veterans to be taken care of, children to be saved from broken families, and an environment to protect at all costs. Right now, however, this country is not equipped to take on any of these threats; not when it is so diverged.

Therefore, your first and foremost duty must be to reunite this fractured nation. In my opinion, this process begins in Washington. According to By Christopher Hare of the Washington Post, recent research has shown that the only other time in history our Capital has been so polarized was during the Reconstruction Era following the Civil War. When a divided leadership of this country is broadcasted on every news channel and T.V station, the people of America follow suite. An example needs to be set in Congress that our country is better united. This will take you, the President, going in front of America and calling for bipartisanship ship across the nation, both in Congress and between Americans.

What the United States currently has is a bought Congress. Our senators and representatives are more concerned with pleasing their donors with their voting record than they are with voting their conscience. They are more worried about keeping the vote of those who got them elected into office than compromising with other congress men and women. You must make an effort to take the money and bribery out of Congress so legislation can be passed and our country can move forward.

Some would argue that the United States of America is not longer great, but I beg to differ. We live in the greatest democracy the world has ever known, and I am confident our country can recover from this depressing and damaging election. This country has been in the hands of men for too long. I am honored and excited to see what these next two terms will bring. Good Luck Madame President. 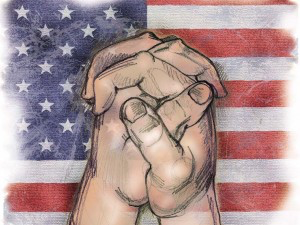 unity american issues
Published on Oct 18, 2016
Report a problem... When should you flag content? If the user is making personal attacks, using profanity or harassing someone, please flag this content as inappropriate. We encourage different opinions, respectfully presented, as an exercise in free speech.
Benilde-St. Margaret's School

I think that the police should stop killing unarmed black people.

The national debt for the U.S is a concerning issue.