I am a a Junior in High School. As a female living in California, I often worry about how I will be treated when I begin to work.The division between men and women employees in society has changed much too slowly. I have constantly noticed that there is still inequality towards women in a workplace. Working females frequently find it difficult to being promoted to a higher position and are more likely to be confined to a lower-ranking position than men. In a study done by LeanIn.Org and McKinsey & Co., they found that " women are a whopping 15% less likely than men to get promoted." It also takes longer for working women to be promoted compared to working men of the same level.

In addition, there is still a wage gap between men and women who work at the same position. Statistics done by American Association of University Women( AAUW ) have proven that in 2015, women who worked full time were only paid 80 percent of what their male counter-parts were paid. This is due to the stereotype set by previous generations that men are superior and more important than women. The US Census Bureau has stated that the wage gap has barely changed since 2007 and that women will not have equal pay with men until 2152. Some people believe that the wage gap between the males and females is normal because women go on maternity leave. This is a weak argument because without women giving birth, the world would cease to exist.

Even though we are in the 21st century, it is disappointing to see that female discrimination in the workplace is still evident. We have advanced in so many ways but are still stuck on a simple stereotype that female are inferior to men. We need to get past that stereotype and start promoting the idea that everyone is created equal. 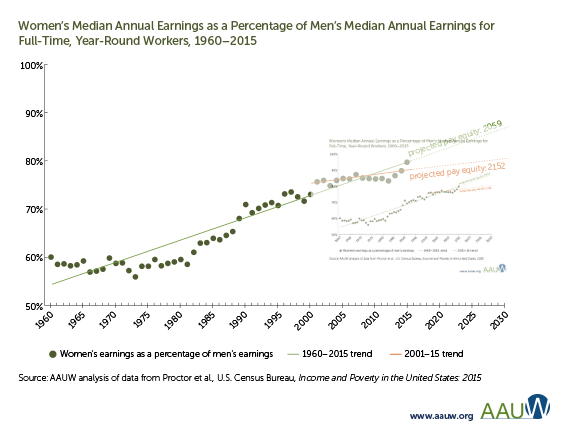 discrimination feminism
Published on Nov 4, 2016
Report a problem... When should you flag content? If the user is making personal attacks, using profanity or harassing someone, please flag this content as inappropriate. We encourage different opinions, respectfully presented, as an exercise in free speech.
Newbury Park High School

Mandatory or readily available education about addiction is not only helpful but increasingly necessary.

Increase the gap between church and state

The motion to outlaw abortion and defund planned parenthood because of religious beliefs is unconstitutional and intolerant.

Donald Trump should rethink what he said in the past because people don't like what he said and they are mad.

Women are definitely discriminated against when it comes to jobs and their pay.

There is no reason for someone to be treated differently based on his or her looks; we are all the same and should be treated with respect.