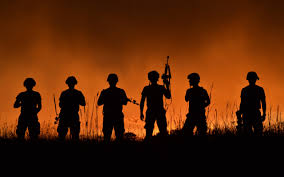 Our military is a great accomplishment that shows all our hard work and our soldiers are something to be proud of. However, do you think that your soldiers are earning enough money?

The reason I believe soldiers are getting paid so little to risk their lives is because the U.S. is in 19.4 Trillion Dollars in debt, a part due to spending over 11 million dollars per day, fighting terror in the Middle East. A way that I believe we could decrease those numbers, or at least try and increase soldier's salary are to change and organize what we spend on, in the military.

An example of something we need to change is that our military receives 598.5 billion dollars out of our 1.11 trillion dollar budget, We must either change that or formulate that number to have a more efficient military. According to “BUSINESS INSIDER” out of the 598.5 billion dollars, the majority of that money goes to the operations/maintenance (198.7 billion) to be able to care and maintain our military soldiers. That number is high however, I believe it is needed in order to keep our soldiers safe, on the other hand, another thing that I believe needs to change is which Branch of the U.S. Military gets the most money. As of 2015, “Business Insider” States that the U.S. Navy gets the most amount at 147.7 billion (that also includes the U.S. Marines) Which I believe is appropriate because their one of the departments that travels everywhere. The second highest is the U.S. Air Force, Which receives 137.8 billion dollars, The reason I believe that number is so high is because of 5,414 Aircrafts we have to maintain.

Personally I Like how The U.S. Navy/Marines are getting the most budget because I come from a family of Navy Sailors and (My brother is in the Army, National Guard) I aspire to be a U.S. Marine. The reason for this is because I really like the bond you make in the military plus, my brother wanted to go in the Marines but couldn't, so I aspire to make it in to make him proud.

In conclusion, This is important to me because I have lots of family members in the military and I want them to be paid fairly and financially stable.

military money america
Published on Oct 30, 2016
Report a problem... When should you flag content? If the user is making personal attacks, using profanity or harassing someone, please flag this content as inappropriate. We encourage different opinions, respectfully presented, as an exercise in free speech.
Health Science Middle School

Almost everyday a family loses a member of their family because of an overdose on heroin.

Electric cars should be more accessible to make the air cleaner

We should stop deforestation to protect animals as well as nature

About 3.2 million kids are victims of bullying. We can help them by stepping up for them.

This letter is about what I believe should be done about crime in our country. Its a serious problem and need to be handled in a serious matter. Al...

Talks about the problems with military funding and our veterans.

National Debt As Known By A Millennial