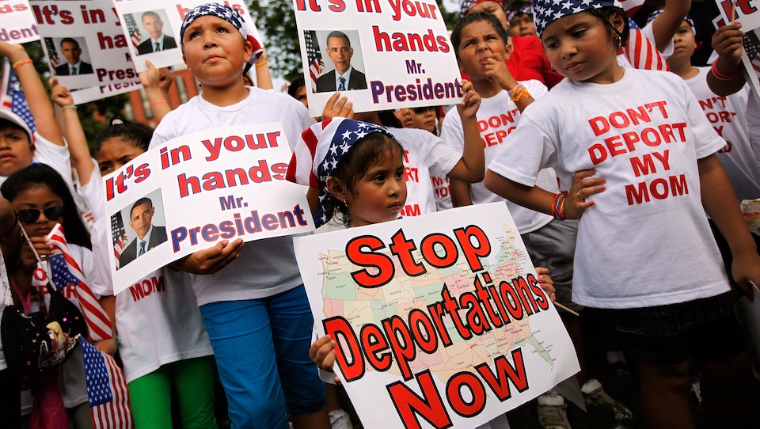 Have you thought about or at least asked yourself, what will happen with separated immigrant families? Among many other people,I have. The topic that I have decided to write to you today is Immigration. I believe that where a person comes from, should not affect what we think of that personś character, and it definitely doesn’t mean that we should deport them. People shouldn’t be kicked out of a land that was for humankind, and just because someone builds a wall does not mean we can’t cross.

Immigration has been a continuous issue in our society and it is being handled in the wrong way.The issue of deporting immigrant families bothers me because itś been occurring for a long time where innocent people out of millions that are guilty, sweats and bleeds enough to make them faint just to cross to a better place, just so they can be kicked back to the place where they crossed from. All because they can’t afford money for a VISA, or they were not born in America. With all due respect, that is not the message that the American dream should deliver when people cross to the U.S. Hope was what brought people to North America in the first place, not fear.

According to DHS´ Office of Immigration Statistics, estimated that there are 11.4million unauthorized immigrants living in the U.S.

So what do you think will happen to all those people? They will most likely be deported back to their country, because they were a meanness, they are criminals and drug adictś. That is someoneś negative opinion that got spread to the rest of the world and is now what pretty much everyone thinks about immigrants too. Except that it is not true, it’s just a stereotype.

Not all immigrants are bad people, in fact illegal immigrants have contributed to society more than this country’s very own Americans. Immigrants take all of those precious jobs that we keep arguing are not theirs for the taking, but no one wants to take those jobs because of the back breaking labor that innocent immigrants do for you. $10 is what someone earns to feed you your fruits and vegetables in the hot sun all day ( and usually earn the minimum wage of $7). So then why do these talented and skilled people take these jobs if they are so terrible? It’s because we keep protesting that immigrants are taking all our opportunities, so they end up with the job’s no one would want to take or job’s that people assume is at their level of understanding.

A lot of innocent illegal immigrants have been working their whole lives, just to get to the side that was theirs before, usually to help their families and live a better life.Now since these people have no choice, due to their lack of money and a paper, they crawl, run, and cross with fear instead of the hope that was supposed to be delivered with the name of the United States of America. Is that really what you want your country to represent, and being the face of it too? Fear is not stronger than hope, and immigrants have a lot to spare. According to.The Migration Policy Institute, Current and Historical Numbers and Shares, ”Immigrants in the United States and their U.S.-born children now number approximately, 26 percent of the overall U.S population.”All those people have hope that they will stay in this country to live a dream.One life, more than 11 million dreams.

America is blessed, it is already great, but what this country needs to improve on is not order,but relationships within the community and outside of it.Relationships have order and is a system that works for both sides.So future president I am asking you to make a relationship with immigrants and their countries.Lower traveling taxes and the cost of VISAS and passports, make it affordable.Deportation is unnecessary because all it takes is communication. I want you to understand that it is not right nor fair to be fighting with your neighbor in a way you caused first, because immigrants are our neighbors and all Americans are immigrants. Please make peace with illegal immigrants and let us work together to keep America great, and not separate families. It’s not a lot to ask ,so don’t make it a lot to understand. ’’Love your neighbor as yourself, there is no commandment greater than these.’’-Matthew 12:31

IN GOD WE TRUST.

immigration deportation
Published on Oct 30, 2016
Report a problem... When should you flag content? If the user is making personal attacks, using profanity or harassing someone, please flag this content as inappropriate. We encourage different opinions, respectfully presented, as an exercise in free speech.
Health Science Middle School

The Cost of College: What Can You Do For Us?

As Future President, how will you help students receive a higher education?

Discrimination is a never ending problem in our world which causes unnecessary pain and trauma. Discriminating others because of their skin color o...

The sentences in Presidential speeches seem to be framed in a very peculiar way.

Immigration helps our nation in ways that nothing else can.

Immigration reform is an important issue you HAVE to address in you term.