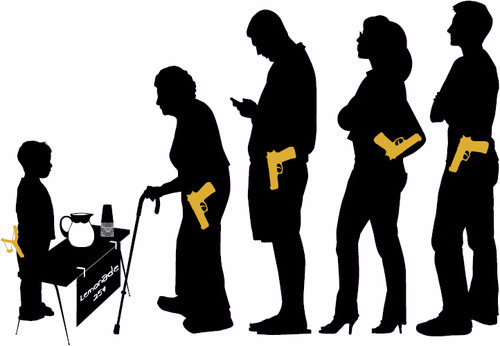 On an average day 91 Americans were killed with guns

I am writing this letter because I believe that people should not have guns because more people are getting killed. The people who are getting killed have 20 or 30 more years ahead of them because people are now having more guns out in public because people want to feel safe and “defend” themselves. There would be more conflict with more guns. How we can fix this issue is by having people hold onto a card that proves that this person is allowed to keep a gun or weapon on them.

I agree with this writing because I wants to put a stop to gun violence and I want laws to exist and I want these things to happen because people keep dying because of gun shooting and laws should exist, for example people should have proof that they are allowed to have guns and not carrying around guns just to hurt people.

I wrote this letter because I wanted to tell you Mr or Ms president that when you become elected I would like you to make a law that people have to carry a card that shows/proves that they are allowed to carry a gun or any object that will hurt or kill people.

Reports on Police over using their power. Soon people aren't going to feel safe in this "united" country.

Women's roles have evolved as the new century rises. Therefore, legislation should improve so that conditions are met in which women can thrive.

Firearms in the United States

Firearms are one of the leading issues in our country and I believe that being educated on Firearms can prevent tragedies.

How a letter can stop Gun violence

In this letter I speak about how I believe that anyone can change a whole country starting in their own community. Specifically, gun violence.