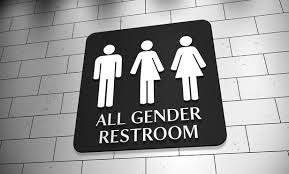 Imagine sending your kids to school and having them use an unisex bathroom. It’s a scary thought because you never know what happens behind closed doors. Many females and males have once in their life experienced sexual harassment or has been sexually abused. It might be very uncomfortable for children and adults to share the same bathroom as the opposite sex. You never know what people are capable of, or what their intentions are.

Transgender people have been forced to use the bathroom with the gender on their birth certificate which causes them to feel uncomfortable when going to the bathroom. According to ABC News “ a coalition of over 200 national, state and local organizations across the U.S. that work with sexual assault and domestic violence survivors are objecting the justifications given by lawmakers to forbid transgender people from using the bathroom of their choosing.” Basically these organizations don’t want transgender to pick and choose which bathrooms they can use, I believe it's s because something may happen to them or they might hurt someone. No, I am not saying that transgender people are a threat but anyone can be a threat because not everyone intentions are good.

Elishe Wittes, a high school student and transgender man has a solution to this problem. She says “ Imagine a room with a toilet, a sink, and a door with a lock. Suddenly everyone's problems go away.” Single user bathroom is a better solution for students that feel uncomfortable going to the gender bathrooms. There could be multiple single user bathrooms, and gender bathrooms as well. I hope you find a solution to this problem because parents are all terrified of something happening to their children. The transgender people don’t want to feel uncomfortable when going to the bathroom, or feel that something might happen to them, but I feel that the unisex bathrooms would only be worse for them. They would be the one to blame for, and unfortunately there are really evil people that would be so angry or so rude to just hurt them. They would be the target and that is putting them in more danger. Please find a solution to this.

transgender bathrooms bullying sexual assault discrimination violence
Published on Dec 14, 2016
Report a problem... When should you flag content? If the user is making personal attacks, using profanity or harassing someone, please flag this content as inappropriate. We encourage different opinions, respectfully presented, as an exercise in free speech.
Cristo Rey Philadelphia High School

In this letter to the next president, I will address the problem of high college tuition costs.

Alcohol is very bad for people and it can harm them.

Are you proud of yourself knowing there are people out there going through poverty?No.I thought so.Then do something about it.

This letter is about child abuse.

We need to stop violence in our world

Bullying, It's a Big Issue

Bullying is a very common and dangerous issue in America, every single day kids are being pushed and pushed to believe that they are dumb, stupid, ...

Who can use which restroom?

I list the problems associated with transgender bathroom rights.