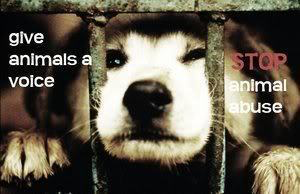 Imagine that someone has taken your pet and put them in the street. They´re neglected, and confused. I´m sure this brings you to concern. To worsen the scenario, your pet is shot down, skinned, and sold to various people and places. Exotic creatures are becoming extinct due to reckless hunting for sport and trophies. Domestic pets are tied up, beaten, and can even become traumatized by the experience.

All my life I have had a fascination with animals. To see them just vanishing from the world due to human recklessness is unbelieveable. It’s just not fair to see pets that should be well taken care of, abused, is so sad. This just makes me feel like something needs to be done about this.

Animal abuse is something that many people need to realize, is a situation that can not go away on its own. “It is unfortunate that many people who witness or hear about acts of animal cruelty are aware that legal action can be taken to help stop the problem. Education and activism are the keys to solving this battle.” says Dr. Larry Hawk, ASPCA President and CEO. The Human Society is a national organizations that focuses on strengthening animal cruelty laws, prevention of puppy mills, and ending animal abuse. The ASPCA is the first humane society in North America that believes that all animals are entitled to respect. They have programs that rehabilitate, protect, and rescue creatures all over the world. These organizations are making the effort to create a better future. According to the Humane Society “there are approximately 70 million pet dogs and 74.1 million pet cats in the U.S. where 20 men and women are assaulted every 20 minutes.”Author Christine Dell’Amore, of National Geographic, states that “A rate of 100 to 1,000 species are lost per million per year, mostly due to human destruction”. It is also stated by that human society that “... the most inhumane and unfair sport hunting practices such as the use of body-gripping traps and snares, bear baiting,the hound hunting…; killing contests, and captive-hunting on forced properties.

Next President, i am aware there are animal rights and laws, but they need to be more strict. Please bring awarness to America that the cruelty and endangerment to these creatures as a very serious matter. That these animals have no voice and therefore need someone to speak up for them. To reassure people that their pet or companion should not be treated in such a way. There should be better protection, more organizations, and harsher penalties for the abusers who commit these vicious crimes.

awareness animal abuse animals
Published on Nov 6, 2016
Report a problem... When should you flag content? If the user is making personal attacks, using profanity or harassing someone, please flag this content as inappropriate. We encourage different opinions, respectfully presented, as an exercise in free speech.
Cristo Rey Philadelphia High School

I argue that the disproportionate killings of people of color is an issue that needs to be addressed.

My letter is to help lower college pay.

Homework is a waste of time ..

Childeren are the future of this world! Child abuse is destroying children all around the world and also destroying their future. What can you do t...

Animal cruelty affects thousands of animals in the United States. So much more has to be done to stop it.

Why do we have animal testing if it harms animals?

Why is animal abuse so important and what should our country do to start helping this issue. Animal abuse and animal testing are both in the catego...