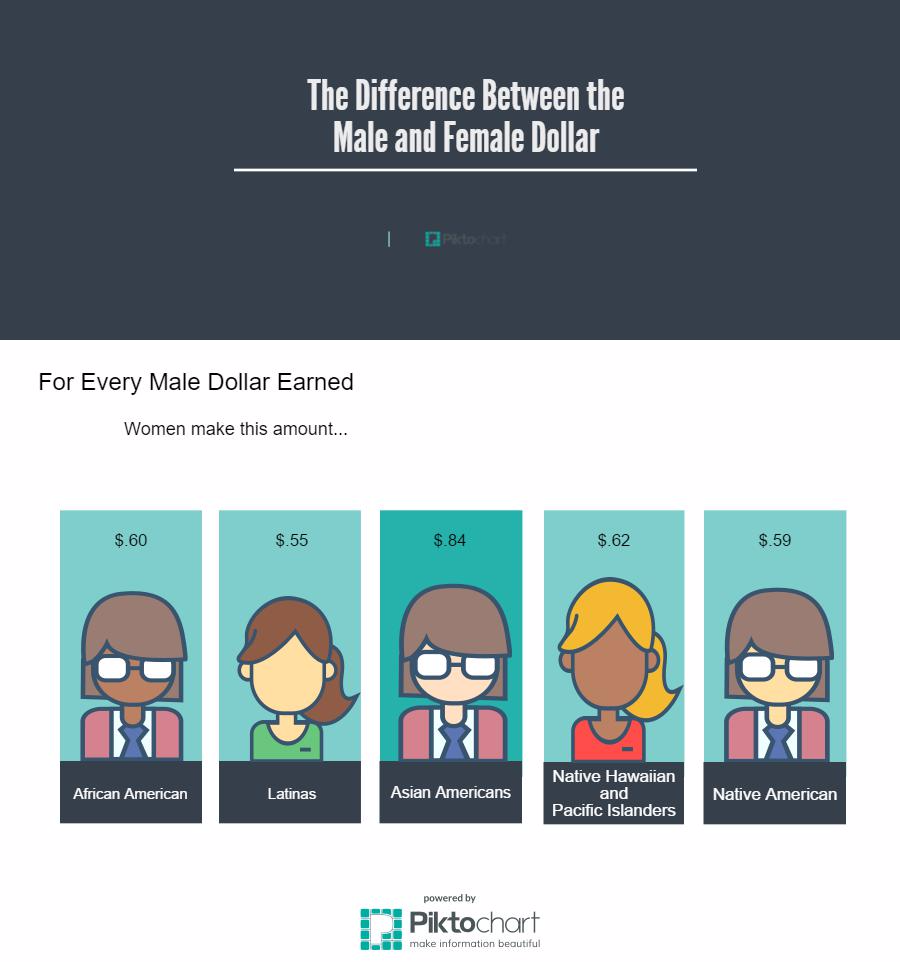 I have a topic that I believe should be addressed; Women’s Equal Rights. Now there is a long fought battle and conversation that never seems to end. Even today discrimination between male and female can be seen in their paychecks- and it’s a huge problem. It is my goal to try, with your help, to fix it.

The wage gap between men and women affects families, single mothers, and female students trying to support themselves and their education. Now I know people will say, “Just get a new job,” or “They have programs for these types of situations,” but according to the Women’s National Law Center, (WNLC), up to 98% of occupations have a wage gap. This loss of money and the debt it can cause adds further to the economic plight of women struggling to support themselves and their families. Now, of course, there has been action to help. The Equal Pay Act of 1963 was passed, so that the gap between women and men could be abolished. This Act is now over 50 years old and there is still an ever increasing problem.

I believe what needs to be done about this is to update the Equal Pay Act of 1963. President Obama, at his State of the Union address in January, asked Congress to pass the Paycheck Fairness Act, because it would update the 1963 Act and close the loopholes that weakened the original Act. This was however turned down with only a 52 vote- when 60 was needed. In The Huffington Post, Susan Collins, stated she believed the new bill would make an excessive amount of change that could cause a negative effect, especially on small businesses. She also then continued to say, “In other cases, [wage disparity] may be due to personal decisions that women make to leave the workforce to raise children for a number of years and then return to the workforce, for example… I don’t think you can assume discrimination.”

This may be true that it could impose a burden on small businesses, but it is a discrimination problem that must be stopped. The WNLC, states that, “African American women working full time, year round typically make only 60 cents for every dollar paid to their white, non-Hispanic male counterparts. For Latinas...55 cents, for Asian American women... 84 cents, for Native Hawaiian and Pacific Islander women... 62 cents, and for Native American women... 59 cents...Women ages 15-24 working full time, year round are typically paid just 84 cents for every dollar their male counterparts are paid. Women ages 45-64 ... paid only 73 cents...women still working at age 65 and older the figure is 67 cents.”

Lilly Ledbetter, for 10 years, has been fighting the Supreme court over a historical discrimination case against Goodyear Tire and Rubber Company. She ended up winning more than 3 million dollars over the discrimination suit in federal court, but later the U.S. Supreme Court overturned the verdict. In January 2009, President Obama signed the Lilly Ledbetter Fair Pay Act which allowed that a person has 180 days to sue for a discriminatory paycheck received.

All these small steps are very reassuring that there is hope for a better tomorrow and I believe fighting for the Paycheck Fairness Act will help with this movement. Yes, it can cause small businesses to stretch on their money, but with workers having a better lifestyle, their work can improve and business could thrive. Families’ lives will change and people fighting for a better education can get the push that they need, so that they can follow their career path.

This change then I believe will better our future and our lives as a whole country.

equity Racism job market workforce gender equality
Published on Sep 6, 2016
Report a problem... When should you flag content? If the user is making personal attacks, using profanity or harassing someone, please flag this content as inappropriate. We encourage different opinions, respectfully presented, as an exercise in free speech.
New Technology High School

Legislature has begun to fall to marketing practices and tricks.

How much land being taken from Native Americans

Many families in the United States are divorced. The current divorce rate is 40 and 60 percent for those recently married and end up to 10 perc...

Why taxing women for their necessary hygiene products as a "luxury" is counterproductive, unprogressive, and frankly unfair.

a short letter about racism.

Students pay too much for college. Education should be accessible to everyone.