The amount of gun violence in our nation is outrageous. In recent years, months, weeks, even days there have been many shootings with major and minor impacts. The fact is that there aren't enough gun prevention laws and regulating gun control needs to be bigger. Guns shouldn’t be in the hands of terrorists, potential threats, mentally ill, or common people. I understand that weapons are used for hunting animals for people who need food, warmth, shelter, etc. But, it shouldn't be so easy for a person to get a gun.

It’s too easy for a person to buy a gun which is a scary thought. Getting a gun shouldn't be a simple hour-long process. Background checks should be expanded when people are trying to buy guns. If a person is a potential threat they shouldn’t be able to buy a gun. If they have committed a crime or if they have ties to people who have done things in the past, they shouldn’t be able to buy guns.

Of course there are some exceptions to people who can have guns. Police, military, and government personnel should have guns. Also, people in small rural areas should be allowed small shotguns for hunting. Although guns are necessary for small towns, military grade guns aren’t. There is no need for a person in a small suburb, big city, etc to have a machine gun sitting in their houses. It is not needed for self defense.

On an average day, 91 Americans are killed with guns. What about the days where there are mass shootings or terrorist attacks? In the 2016 Orlando shooting, 49 people were killed and another 53 were wounded. That massive tragedy was caused by one shooter on one night. In the Paris terrorist attacks, over 130 people were killed. Almost 33,000 people die every year from guns. This just proves how terrible gun control is, not just in our country. But to top it all off, in the US there are about 88.8 guns per 100 people. The next highest country, which is Yemen, is around 50 guns per 100 people. The number of guns per 100 people in the US shouldn’t be that high.

So, future president, when you get elected a major thing for you to look at is the gun control in our country. I would take into consideration the amount of guns per capita and realize that the number should drop. Mr. or Mrs. President you should make more laws to regulate gun sales. Background checks should be expanded and the amount of gun sales should drop. There doesn’t need to be gun shops on the streets of major cities or suburbs. If I were you, I’d allow government officials to take guns and compensate for them. They should be taken from the people who don’t need them or are a potential harm. The lives of the people are in your hands and you need to do more to keep them safe. 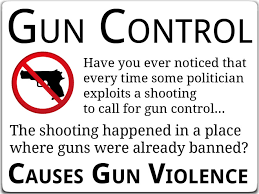 gun issues
Published on Nov 7, 2016
Report a problem... When should you flag content? If the user is making personal attacks, using profanity or harassing someone, please flag this content as inappropriate. We encourage different opinions, respectfully presented, as an exercise in free speech.
Bala Cynwyd Middle School

Changing the future of illegal immigration

Why We Need Guns In America

Citizens in America need to be able to carry around guns.

There is one topic that really catches my attention, and I hope it catches your attention too. That topic would be gun control and violence.

The importance of gun control and why we need it

What's wrong with gun control and how we can fix it.

In America, gun control has been an issue that has caused a lot of trauma to the nation from small injuries to catastrophic deaths. The issue of gu...