I am writing to you about a very touchy subject in America, Guns. Guns, arguably the most controversial subject of today. They have been involved in the worst crimes of this century.. It seems like we need to tighten gun control laws but that's not quite what we need to do. Guns can protect us, just look at the statistics. Gun control laws do not help society. Gun control laws cant become any stricter in America.

There has been lots of discussion over the Second amendment. It states” "A well regulated Militia, being necessary to the security of a free state, the right of the people to keep and bear arms, shall not be infringed."  This means one may carry a gun with them to protect themselves at all times, with some exceptions (banks, airplanes …etc). This doesn't mean only people from the military can carry weapons sometimes.

Outlaws are known as the bad guys for a reason. They are the ones who break the laws. Creating more laws won’t necessarily stop the criminals. Sarah Palin says,”The bad guys, the criminals, don't follow laws and restricting more of America's freedoms isn't the answer when it comes to self defense.”  Statistics show that 60% of people who own a gun simply use it for protection against crime. This means most people plan on never using it to hurt anyone. This matters because if we tighten gun laws, then we won't be able to defend our selves. Jeffrey Miron says,”The challenge with gun laws is that by definition criminals do not follow the law. For example, Connecticut's gun laws, some of the strictest in the nation were not able to prevent this atrocity.”When they say atrocity, I believe they mean even though Connecticut's gun laws are very strict, they still have a huge amount of crime. “Thus the classic slogan- when guns are outlawed, only outlaws will have guns — isn’t only a word play; it is a fundamental insight into the folly of gun prohibition. Such an approach means the bad guys are well-armed while law-abiding citizens are not.” Leading back to my claim, this leads us to realizing that guns control laws don't actually make a safer community.

It is believed that in communities with stricter gun laws are safer but that is in fact the opposite of what's true. David Bailey from the huffington post says,”If you look at the jurisdictions with the strictest gun control laws, almost without exception, they have the highest crime rates and the highest murder rates.”

It may seem like allowing the public to arm themselves just creates more armed criminals but it's very different than that. If someone is planning a shooting in gun-free zone they will probably go through with it. Almost all shootings are in gun free zones. This is because someone won't shoot where many people have guns because they are afraid of getting shot themselves. This is why guns shouldn’t be banned or restricted. It's alright to have places like airports where guns are banned, that makes perfect sense and is a great idea but we can't make the world gun free.

Shootings may never completely go away. That is a sad fact. We can help prevent them though. All we have to do is not restrict guns. Yeah it seems crazy at first but with the help of the next president,you, we can decrease the amount of shootings/homicides and increase the safety of America. 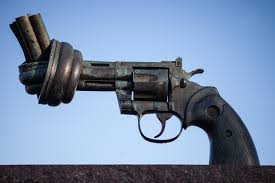 gun issues
Published on Nov 1, 2016
Report a problem... When should you flag content? If the user is making personal attacks, using profanity or harassing someone, please flag this content as inappropriate. We encourage different opinions, respectfully presented, as an exercise in free speech.
East Junior High

Taking a Shot at Gun Control

My letter is about gun rights. It argues against gun control and gives alternate solutions. It also states why guns are important to Americans.

Gun control has not been effective for several years and this letter talks about the deaths in america and also compared to different countries. An...

Now I will not get all radical on you, the reader, and tell you that everything I say is right. This is a simple representation of what I believe in.