In the U.S. today, there are people being executed in sometimes painful ways for crimes that they may or may not have of committed. It’s giving government too much control; they should not be able to determine if a human should live or not.

People say that the death penalty gives families of the victims peace of mind knowing the criminal is dead, but what about the criminal's family? Criminals are people too, and most of them have family. What if a close friend or family member is driven to avenge the death of the criminal? There's no guarantee people won’t be saddened or angry, and with extreme emotions could come extreme decisions. It's very likely the killing could become a vicious cycle. I’m quite sure you’ve lost somebody close to you, perhaps a beloved pet, or maybe a close friend or family member. I know I have. Sometimes after trying to convince yourself it wasn't happening, anger would set in. There is no exception for the families of criminals being executed.

I think the death penalty is a violation of the 1st amendment. The first part of it states “Congress shall make no law respecting an establishment of religion, or prohibiting the free exercise thereof”. I’m sure you know that while on death row, it is usually not permitted for any physical contact visitations. While on death row, what if you want to call upon a religious leader? Many times religions call for physical contact while praying. What I am trying to say, is that for families who might want somebody to come in to do religious ceremonies for the inmates, it is impossible, because they can’t really have any sort of religious initiation that requires contact. I think that the death penalty violates the first amendment by refusing people some beliefs and necessary ceremonies.

My next reasoning is that it gives government too much power. Could you imagine living, knowing that your life was going to end soon, maybe within days? I know I couldn't. I feel the government has way too much control when it comes to human lives. I think giving them the power to decide if one should live or die is not right. Every life is important. Even compared to millions, it's still a life, unique in its own way. And no matter what, everyone's death effects at least one person. It is just way too much power for government to say if someone lives or dies.

Finally, I feel the death penalty also violates the 8th amendment in the constitution as well as articles 3 and 5 in the universal Declaration of Human Rights*. In the constitution, the eighth amendment notices cruel and unusual punishments in cases of prosecution as unlawful. During the process of capital punishment, inmates usually experience pain during the execution process. Usually excruciating. Nobel Peace prize winners have agreed that the death penalty is unconstitutional and should be abolished . In the *UDHR, Article 3 says “Everyone has the right to life, liberty and security of person,” and article 5 also says, “No one shall be subjected to torture or cruel, inhuman or degrading treatment or punishment.” In all respect, I feel those speak for themselves against the death penalty.

In conclusion, the death penalty is unconstitutional and cruel. So many people have tried getting rid of it for years. Thankfully, it's not being used as much as it once was, so totally eliminating it is a step in the right direction for America. So many reasons contribute to why it's such a bad thing. Everyone from teens to elders have been on death row for so many years, some even dying awaiting execution, so I ask that you end the practice of the death penalty in the U.S. once and for all. 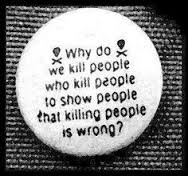 We should be able to sleep in

Dear President of the US,

This is a letter to the president about our school's grading systems worldwide.

Police Need to be Treated Better

Police are treated like dirt. I want to change that.

Dear Mr. or Mrs. President, Thank you for taking time out of your busy schedule to read these letters. I know it must take a while to rea...

Is the death penalty necessary?

Why the death penalty should be more common

Death Penalties for the Innocent ?

The use of enhanced interrogation techniques is an issue that is debated by both political parties, but regardless of orientation, people need to s...