I’d like to discuss the topic of student loans. You have probably heard this complaint many times now, but it is a very important issue to the people who have to pay them off, and will have to in the near future. As a high school student concerned about my future, this is a very big issue to me that i would like to be resolved. In which case, I believe that student loans should be lowered, in order for people to be better financially.

According to MarketWatch, there is a total $1.2 trillion dollars in student loan debt. It is the second highest level of consumer debt behind only mortgages. By these results, it shows just how big this issue is. The high student loans affect people with financially dependent children and people who are not employed full time. Meanwhile, they will struggle with making bigger purchases that drive economic growth, such as houses and cars. Since approximately 40 million Americans are batting student debt, it’s hard to make these bigger purchases and raise families.

As the President, I believe this issue would be a very important thing to fix, and could change people's lives. Although these student loans go towards the government and helping make our government better, that doesn’t erase the fact that these student loans are severely hurting the lives of the American people. Looking towards my future, I definitely do not want to be worrying about paying for college after I finish, I can assume people with families to take care of and other matters do not want to be paying a lot for something they have already finished. In my opinion, since the interest rates are so high, it is resulting in student loans to be higher. Lowering the interest rates would lower student loans and definitely help out. 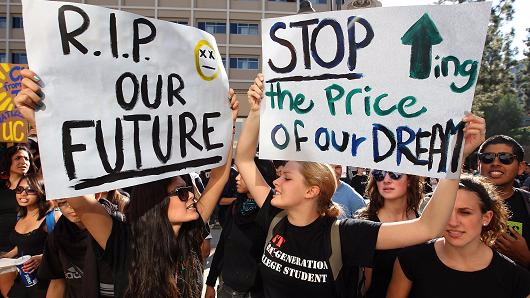 student debt
Published on Oct 31, 2016
Report a problem... When should you flag content? If the user is making personal attacks, using profanity or harassing someone, please flag this content as inappropriate. We encourage different opinions, respectfully presented, as an exercise in free speech.
Avondale High School

Do not Outlaw or Ban so called "Assault Weapons"

America Needs to Get a Clue About International News

How the lack of international news in America is hurting the U.S. And how it can be helped.

Preservation of the Constitution

The letter explains how our country has changed in recent years and how change should be made for the good of all people.

A letter about the problems of the mentally ill being homeless in the United States.

Flaws of the Foster Care System

Foster care has more negative effects on the former children than positive.

College tuition is depriving students of the real education that they need. The price to go to college is increasing each year and we need to do so...

Music programs, like band or orchestra, have several benefits that last for a lifetime.

The following letter will consist of road safety by banning or strictly enforcing cell phone usage while on the road.

A little more information on how the organization started and why it is important.

Dear Next President: As college education costs skyrocket, student loans are at an all time high. Need data? This infographic provides examples of ...