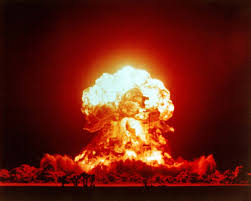 I would like to inform you about the issue of nuclear war we have so many nuclear weapons of mass destruction that we can use but by doing so we could destroy the world we also have cases where staff is not trained well and the do not know how to work the systems also all the tech is outdated they still use floppy discs.

The problems with them are that they make people have fear of nuclear annihilation and they can destroy the world even one blast could send us into a nuclear ice age by blotting out the sun.

The only reason we have them is to just have them and to say if you mess with us your dead but we take very bad care of them and at any minute they could be hit by a small piece of metal and explode.

Basically all we have to is press a button and then boom everyone is gone but if we stop producing and stockpiling them we just might have a chance to survive another thousand years.

We need to get rid of enough nukes so that we can keep tabs on all of them so that no harm will come to the citizens we might just need to send them to space but not arm them just let them fly out into the darkness of space.

Mr/Mrs president I know that I am only 14 but I believe that we can postpone nuclear annihilation for a long time if we reduce the number of nukes that we have and we need to stop production so that we don’t have any more bombs than we need. with that I urge you to take this into consideration.

nuclear weapons nuclear extinction
Published on Nov 7, 2016
Report a problem... When should you flag content? If the user is making personal attacks, using profanity or harassing someone, please flag this content as inappropriate. We encourage different opinions, respectfully presented, as an exercise in free speech.
Billings Public Library

The Seriousness of Nuclear Bombs

Nuclear weapons are a serious issue and these bombs have the ability to kill millions.

the threats and possibilities concerning nuclear weapons in modern day

This letter was created to express my concern about the current US relation with North Korea. Another concern is the situation of North Korea posse...