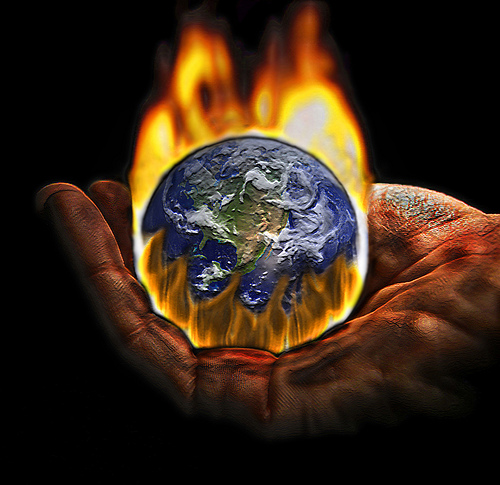 Global warming. It’s not just two words, but so much more. It is the largest and most serious problem in our world today, and it isn’t getting half of the attention it deserves. It has the potential to cause huge problems in the future, yet barely anything is being done to stop it. We need a leader who doesn’t just acknowledge climate change as a reality, but really takes action. We need someone who can stop this threat, or at least slow it down.  The best way to do this is by decreasing the amount of greenhouse gas emissions.

You might wonder why global warming is such a problem. Why it should get more attention than other problems that might seem even more serious. For that, you’d want to look at the consequences global warming will have on our world.

There’s the one most have heard of, and we are noticing already, the melting of the polar ice caps. For example, as the National Resources Defense Council states, “Melting glaciers, early snowmelt, and severe droughts will also cause more dramatic water shortages and increase the risk of wildfires in the American West” ("Global Warming 101"). It will also cause sea levels to rise, which will have horrible consequences in the future, “such as swamping swaths of Bangladesh, submerging the Marshall Islands and flooding low-lying coasts around the U.S., including Marina del Rey and other Southern California seaside communities” ("Climate change is the most pressing issue of our time. So why isn't it getting more play in the election?").

Another problem is the increased number of natural disasters that have been proved to have been caused by global warming. For example, as NRDC reveals, “Scientists agree that the earth’s rising temperatures are fueling longer and hotter heat waves, more frequent droughts, heavier rainfall, and more powerful hurricanes” ("Global Warming 101"). These disasters could cause massive amount of damage if they increase in size and magnitude, “The earth’s ocean temperatures are getting warmer, too—which means that tropical storms can pick up more energy” ("Global Warming 101"). The increased power of storms reveals that global warming is an important problem that could have devastating consequences on our world in the future.

A final problem is that climate change will deeply affect the world’s ecosystems and food chains. One example of this is can be seen in the article written by the NRDC, “Disruption of habitats such as coral reefs and Alpine meadows could drive many plant and animal species to extinction” ("Global Warming 101"). Another example is the polar ice caps and glaciers melting. This could cause many species to become extinct or severely endangered, revealing that in order to save the animals whose extinction will deeply affect the food chain, we must address and stop global warming.

Some people may believe that the change in climate isn’t caused by humans, and that it is natural, like the ice age. However, the fact is, humans are causing global warming by releasing tons of greenhouse gases into the atmosphere, causing it to heat up. People may believe that global warming isn’t something we should waste resources and money on solving when there are so many other problems. However, because of the chaos it has the potential to cause, global warming is the most serious problem in the world, currently, and it must receive immediate attention.

In conclusion, because of the consequences, global warming is a serious problem that needs to receive just as much or more attention as problems the world is considering the most important. Global warming will cause flooding, severe natural disasters such as hurricanes, and the extinction of many species. It is your job, as president, to solve these problems and make the world a safer place.  My proposal is that you encourage the decreased amount of greenhouse gas emission. This would make the world a safer place, and allow you to fulfill at least part of your job as POTUS.

A woman has the right to decide what she would like to do with her body and the government should not be able to take this right away.

A State of War

We do not need further military spending.

¨To the President that wins this election, there are problems that none of the presidents before you have been able to solve.¨

This movement is to strive away from this Black White society where Whites or the racist government control the people.