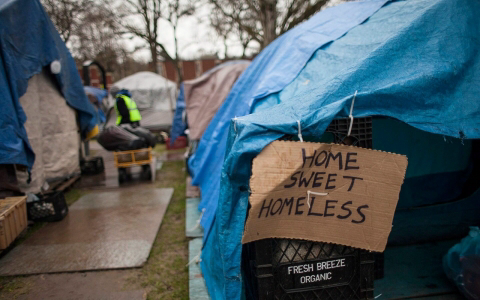 Have you ever helped a homeless person? The homeless population is growing faster than the non-homeless population in the city of Seattle. That’s how important this problem is. We as a society and a country must work together to prevent homelessness and care for those who are homeless. Throughout this letter, I will first talk about homelessness stereotypes, then I will begin on the topic of what we can do, and finally I will talk about what YOU can do. Let's talk about homeless stereotypes.

We are all guilty of following the stereotypes about the homeless, even myself. We as a society need to change how we think about these people, and this is the main reason why many people in this world don't care or take thought to the homeless community. This is especially something that many people don't realize they do. These stereotypes include: They are all drug addicts, if you give them money they will spend it on drugs or alcohol, they are dangerous criminals, they are lazy, they made horrible decisions to make them homeless, you can probably think of more. Something has to be done to put an end to these stereotypes, so I ask you, future president, to find a way to put an end to this. I got this information about homeless stereotypes from https://soapboxie.com, "Common Stereotypes and Misconceptions about Homeless People." Keep in mind that our focus when it comes to important things shouldn't just be about war, but also about the homeless. If you, the president, can’t do anything then we need more than just one high school freshman to end this stereotype, we need a country. We need more people to focus on this problem.

A major fact to support my thesis on how important the homeless is : Volunteers looked for people sleeping under park benches, in business doorways, and tents. In 2014, the volunteers counted about all throughout King County, 3,123 people on the streets. The result of the 2015 count was 3,772. That's a 20.8 percent increase from 2014. The count of the homeless population is a one-night thing and does not include about 6,000 homeless people sleeping in area shelters every night. Then there is the most recent one night count and the survey found that more than 4,500 people are living on the streets of King County as of January, 29, 2016. That is a 19% increase from the “One Night Count” in 2014! (http://www.homelessinfo.org, 2016 Press release). Imagine if you were homeless, if people walk past you not taking notice that you are suffering and others don’t care. Imagine how betrayed they feel that their own kind isn’t helping them. This needs to be put to an end, it has been going on for too long and it has to stop. The slightest things can help them, a smile, a head nod, but especially donations. Next time you see a homeless person try and do this.

The reason I told you that, future president, is because I’m giving you ideas and information on what can help the homeless people. Like I said I can’t do this on my own, but you can definitely carry out these ideas and statements to the U.S. I’m no genius but I know that who ever the next president is, they will have money. I suggest opening more homeless shelters and more therapy places or places that help those in need with job interviews, a place like that here in Seattle is the YWCA in downtown Seattle. It’s a place where they help homeless women fill out job applications, have interviews, and dress nice for those job interviews. More places like this will help those who have fallen into homelessness. We are all familiar with the “Jungle” here in Seattle. On my way to soccer practice on the radio they were interviewing homeless people who called the “Jungle” their home. They said it made them feel safe as they were welcomed. They also mentioned that they prefer the “Jungle” more than shelters. More places like the “Jungle” but way more organized, and way more taken care of. Many people will not agree with how important this problem is, but I truly think those facts that I stated earlier will most likely change this person's mind. We as a society and a country must work together to prevent homelessness and care for those who are homeless. If we as a society don’t do anything, and If the future president doesn’t do anything, this problem will only get worse, we must care for the poor and vulnerable.

job market homelessness stress money society
Published on Nov 9, 2016
Report a problem... When should you flag content? If the user is making personal attacks, using profanity or harassing someone, please flag this content as inappropriate. We encourage different opinions, respectfully presented, as an exercise in free speech.
West Seattle High School

Misuse of tax dollars can be stopped by giving us a say in where our money goes.

Why we need to have stricter laws and regulations on guns.

To next Presidential Canidate

In order to protect the well being of women, We deserve equal pay, the right to be heard, and control over our body and decisions.

Why Are Homeless People Treated So Badly?