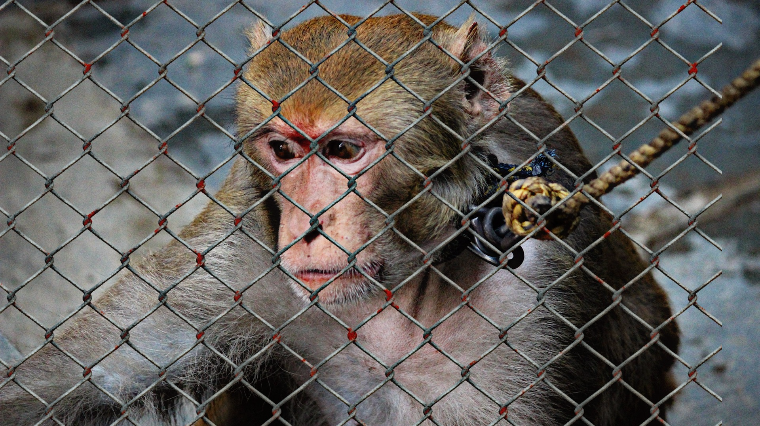 Animal testing, or animal experimentation, is the usage of animals in experiments to discover controlled variables that affect the animal’s behavior or biological system. According to Statistic Brain, a website that records statics, each year, a total of 19,500,000 animals are killed from this research. Animals have a heart just like the rest of us, they have a life, and we should respect that. Now, is there really another alternative that's cruelty free for testing? We need to end this way of experimentation and find out answers without cruelty!

Einstein once said, “We cannot solve our problems with the same thinking we used to create them.” The solution? After doing much research, I came across an alternative called adult stem cell research. It’s true that many people think animal testing is a way to find answers that we need, but in reality animal testing is actually proven to be ineffective. Humans and animals have very different physiologies. For instance, one article stated the following, “In fact, 90 percent of medications approved for human use after animal testing later proved ineffective or harmful to humans in clinical trials.” (Overton) This demonstrates that along with the killing of several animals, animal testing does not give us accurate answers in return either. So why we should continue a cruel and ineffective method of experimentation? Its not getting us anywhere!

Why animal testing? There are much more humane ways, and especially with the advancement of technology, we have potential to replace this cruel way of experimentation. One team of Maryland scientists are using adult stems cells for experimentation. The team believes that this is a much more accurate and efficient (time saving) method. This demonstrates that another group of people, and not just any group of people, scientists, who believe that animal testing is not the right way to go, our solution is adult stem cell research. Its effective and is not harming! ("Only on 7: Maryland scientific team's breakthrough could end animal testing")

From dish wash soap to cosmetics, the rise of cruelty free products keeps getting higher. We have published shopping guides on cruelty-free mascara, lip balm, and shampoo, as well as a guide on recognizing animal ingredients in cosmetics. (Overton) This is a signal that cruelty free is getting bigger. It’s time we leave animals be and leave animal testing behind.

We are spending so much of money on useless experiments. We’ve spent billions of dollars to cure cancer in mice , but yet we have not been close to a cure for it. Adult stem cells are cells that are present in growing human tissue. Adult stem cell research is much more effective than animal testing because there no complications and no failures related to tissue rejections. International researchers who use adult stem cells have had success in treating Crohn’s disease, thalassemia, and cardiac infraction (actual answers). In fact more than seventy conditions have been successfully treated by adult stem cell research! Now the remainder of unsolved health mysteries will be found by this method, leave animals alone, and save our money for useful things.

I am convinced that animal testing needs to come to an end. There are various reasons to do so. Animal testing harms many, many innocent animals who have a life just like us. Not only that, it is also ineffective. Animals have very different physiologies than us humans and we are spending far too much money on a useless cause. Let’s stop this nonsense, and use a logical way of experimentation, such as adult stem cell research, to solve our problems!

animal abuse lives matter
Published on Nov 7, 2016
Report a problem... When should you flag content? If the user is making personal attacks, using profanity or harassing someone, please flag this content as inappropriate. We encourage different opinions, respectfully presented, as an exercise in free speech.
West Seattle High School

My issue was Deportation and how it's affecting immigrant families, this is important because it's affecting children in a huge way when they are t...

The justice system favors one party over the other because they focus more on identifying the criminal before breaking the law rather than their ac...

My letter to the President.

This is my letter.

I wrote about how animal abuse should be a felony in all 50 states.

ANIMALS ARE SCREAMING OUT. WE JUST CHOOSE TO IGNORE.

Dear Madam or Mr. President, My name is Jenna, and I am 13 years old. Although there are many other letters with the same topic, I find animal abu...

Throughout the years, many things have improved. It's time that education takes a part in that as well.