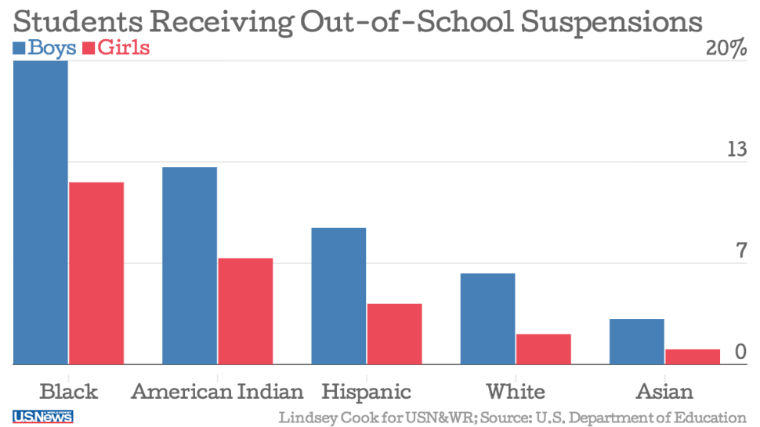 There are different problems with student equality, but I am focusing more on unequal punishment by race in school. Of course gender also plays a role in equal treatment of students, but I am focused more on the racial aspect of student equality. Recent studies show that students of ethnic, hispanic, and race backgrounds get punished more severely and more often than white students. There are slightly more problems racially than gender wise.

According to ncbi.nlm.nih.gov even though ethnic, hispanic, and race students get punished worse than white students, race students punishments are typically the worst. Lots of people believe that this is because students of color are more likely to do bad things, but the percentage of those students that do bad things is truly very small. Studies have shown that this population tends to get punished the most, and the worst. Some of these students speak differently, and the way that they speak can sometimes be taken the wrong way which can get them in trouble. ncbi.nlm.nih.gov wrote “Upon his arrival, the Black male student met the teacher at the door and said, “Man I was just fixin’ to bounce on you.” To the students bewilderment, the teacher wrote him up to be suspended. The teacher (mis)interpreted the phrase, “fixin’ to bounce on you,” as a threat of physical violence, when from the student’s perspective he was noting the teacher’s tardiness and jokingly saying that he was just about to leave to classroom.”

In some cases, money might play a role in how students get punished. Families with more money tend to go to better schools that may not have racial disparity. Students may get treated differently because their family has more or less money. If you have more money, your family typically lives in a better area with a better school.

If we let unequal punishment based upon race continue to happen, the future will turn into the past. We will have separate schools for different races. We will have girls with less opportunities. Do we want our future, that we have worked so hard to create, become our past?

inequality in schools racial discrimination race school punishment racial punishment
Published on Nov 7, 2016
Report a problem... When should you flag content? If the user is making personal attacks, using profanity or harassing someone, please flag this content as inappropriate. We encourage different opinions, respectfully presented, as an exercise in free speech.
Brielle Elementary

This piece talks about the problems of over fishing striped bass and how only federal laws can help stop the species from going extinct.

Litter Is Destroying Our World

Dear President, “We are living on this planet as if we had another one to go to” (Terri Swearingen). Are you littering, or are you picking trash ...

Discrimination is a huge problem, and we need to work together to fix it.

As a young black male, Mark Jackson worries about police violence every day. He hopes the next president will bring more accountability to the nati...