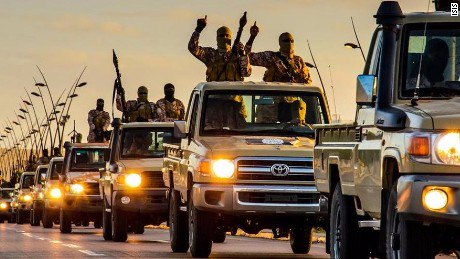 When you become the president in the election (a few days away) see if you can send in more U.S troops to help out in the battle to liberate Monguir from ISIS and at least drive them out of the country (which is their last stronghold).Terrorism has been around for a long time, ever since WW1 early terrorist groups always attempted to start a new war since WW1 and have been a reason many proxy wars and conflicts are still around today.You could estate new laws to get permission and look at your ID in order to get gun trade,and double sercurity in France especially since the Paris and San Bernardo terrorist attacks.

Another reason why terrorism needs to end is because if we don’t the chances of WW3 starting now or a few years from now could become a dark reality.Candidates in the nearing election have their own opinions of “getting that or don’t,doing that or don’t do it” on how to stop ISIS and other terrorist groups with recent activity going on.Hillary Clinton wants to use controlled drones to make ISIS flee and wipe them out for good,while another candidate wants to refrain from using drones and just let the U.S troops with Iraq soldiers deal with the terrorist group.A website suggests that dealing with ISIS is the #1 priority for your new job,people have always been alerted about terrorism in the aftermath of an attack which can go up to 30 or 40 deaths if it is a mass shooting the deadliest on being the Paris attack,up to 140-150 deaths!

9/11 is also a paticular reason why you need to help out in the war against terrorism,another attack that impacted the world greatly.Al-Queda another major terrorist group hijacked 4 airliners to bomb the World Trade Center and to hit the Twin Towers,2 of the planes hit the towers while the third plane crashes on a section of the Pentagon,and the finale plane crashed on the Philidelphian River after the passengers rebelled against the terrorist hijackers.It was the worst attack in history,and finally made the world more alert on the terroist groups in the Middle East.If you don’t do something now,they will strike again.

(Fact-terrorist members are sometimes old veterans of war like the Afganistan-Russian War,maybe even WW2,and the Vietnam War etc.)

terrorism
Published on Oct 24, 2016
Report a problem... When should you flag content? If the user is making personal attacks, using profanity or harassing someone, please flag this content as inappropriate. We encourage different opinions, respectfully presented, as an exercise in free speech.
Rahway Academy

The War on drugs has been a failure.

This is a letter addressing the problem of terrorism.

Terrorism is violent act that is causing families to leave their towns and even their own country.If terrorism can start it can stop.