Currently as a 7th grader, college expenses are not on my mind but it is not far away from being on it. In a few years I will be going through the problems of my siblings. I have a brother and sister stressing over college work and classes but also stressing over their debt they will be and currently are in.

Parents and teachers always say education should be the main priority of a person, but how can it be the student focus to go on their studies if they’re focused more on their college expenses? Isn't college supposed to bring us forward in life not hold us back? Cost of college in this country is not affordable for many people. We shouldn't have to pay so much money for an education that we need. A college education is necessary to be successful in life but it is hard when it is so expensive for many people. Try to acknowledge the amount of money in debt the average person is in years after graduating. In 2016 Americans owed nearly $1.3 trillion in student loan debt, spread out among about 43 million borrowers. The average Class of 2016 graduate has $37,172 in student loan debt, up six percent from last year. The average cost of tuition and fees at a private, nonprofit, four-year university this school year was $32,231. Roughly $32.000 is way too much just for an education and can take many years to pay off, especially for people who have to pay bills and provide for a family.

Many things can be done to stop this problem, but the only person that can change this is you! The government doesn't want the cost of college tuition to decrease because it will not benefit them in anyway. You could change their opinion if you acknowledge how much of a issues this is for many people. If the tuition for college was lowered, kids could focus more on school work rather than on how they will be able to pay off their debt. Some people might say lowering the price if college will lower result in having to lower faculty and staff’s pay, having less money for equipment and repairs. Although the colleges will getting less money than before they will be getting more student which gets them more money in the end. Its a "win, win situation" for everyone involved but the government doesn't see how this could help everyone. All you need to do is acknowledged this huge issue and act upon it. If anyone will be able to solve it, it will be you! 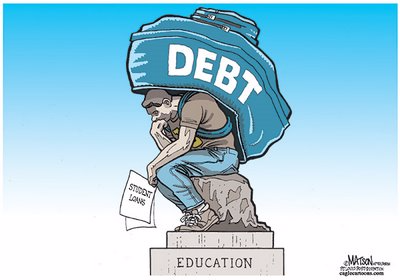 Education Costs
Published on Oct 25, 2016
Report a problem... When should you flag content? If the user is making personal attacks, using profanity or harassing someone, please flag this content as inappropriate. We encourage different opinions, respectfully presented, as an exercise in free speech.
Rahway Academy

Racism needs to be solved or this country will go downhill.

Children all over the world are child slaves and it needs to stop.

Bring Together, Not Apart

This is a letter about bringing the Black community and Cops together, instead of tearing them apart with violence and tear gas.

The college tuition should be lowered.

College tuition prices are incredibly high in the United States. The next president needs to do something about this to continue to give all studen...

In this letter, I will address the rising prices in tuition.