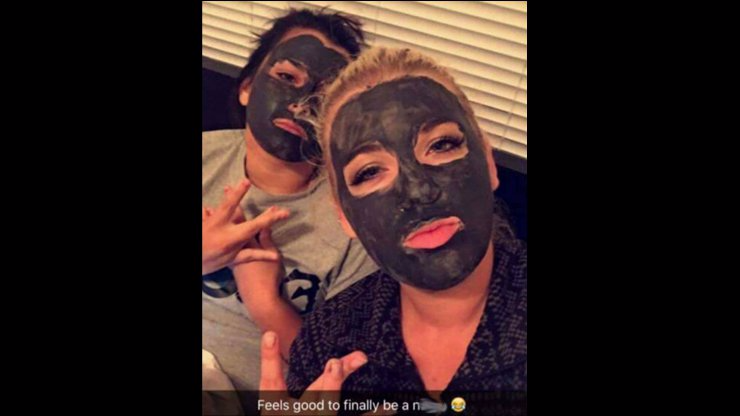 This picture shows a very good example of how white people make fun of a very serious cause. Black lives do matter even though people don't agree with it.

In this picture this college students have on a face mask that is used to clean your face, not to make fun of black lives. This is a serious problem because if the shoe was on the other foot and blacks made fun of whites the world would go crazy.  An black people would be every type of n-word in the book. There have been plenty of situations where there was no equality. In this world today we have white college students like Brock Turner raping girls while they can't function, but who are able to still walk away free. How is that right? Then there are situations were a black person has drugs, for example, marijuana, and they will get up to 5 years in prison and then that's on their record for good. While we still have rapist out living their lives and going to college -- that doesn't add up at all. Black people have freedom, but it is very limited. We still don't get treated like humans. Where is the respect for my people? Mothers and fathers are killed by white cops and now they have children that have no parents because of the hate for black people.

In my opinion I believe that these two people don't really know how it feels to be a black person. Black people have been through a lot and still haven't got all of there freedom. It is hard for black people to get a good education and get into good schools because of their skin color. It's not right; these students are in college just because they can afford it and and because of their skin they are privileged. Black people today are still fighting for the right to be treated the same way as whites. Our teachers are white, our judges are white, our police are white. Where are our black leaders? I know that there are plenty of them out there, but no one has giving them a chance to be a leader because they think that they are bad people. Black people die everyday, and police couldn't even give reason for why they killed them. In this video, it shows that the female police officer says this black man looked like a bad guy and fired.

After watching this video, it shows she had no reason to shoot this man. He didn't do anything wrong. She just wanted to do it because she doesn't like black people; now his children have no father. They are messed up for life, and they will never understand why they don't have a dad -- all they know is that he is dead and the police shot him. There are a lot more of examples of racism in the world. I just want you to know that this is an issue that needs to be addressed and no one has  done it yet. Black people want to be treated equal and like they matter because black lives do matter. Some one needs to address the black people and help them and make their community better. It's just not all about whites. Blacks want and need chances, so let's end this long lasting journey of racism.

race equal rights white people black lives matter
Published on Nov 9, 2016
Report a problem... When should you flag content? If the user is making personal attacks, using profanity or harassing someone, please flag this content as inappropriate. We encourage different opinions, respectfully presented, as an exercise in free speech.
The University of Chicago Charter School, Woodlawn Campus

I have an issue that needs to be covered: the rights and treatment of my autistic brethren. We have been trampled upon because of our disabilities ...

How Can We Strengthen Our Nation's Youth?

How the use of the words "bully" and "bullying" are causing our nation's youth to not be able to handle diversity and climb to success.

America currently faces healthcare issues. For some, the ride to get to the hospital gets dangerous, as well as the hospital itself. Our payment sy...

The reasons why the next president is a racist. To show how you do not treat every man and women equal, how you are racist toward many people.

African Americans are now afraid that they will get shot by a cop for no reason. Black people are treated unfairly and accused of many things. All ...

Cops Are Suppose To Protect Us

Shouldn't you call the cops when you feel in danger? They should protect us, but what do we do when they start breaking the law?