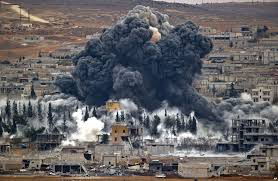 Although currently dormant, Nuclear warfare sits as a potentially devastating threat to the United States and the rest of the world. Ever since the initial drop at Hiroshima during WWII, nuclear weapons have the taunting threat to completely destroy metropolitan cities and the threat to completely wipe out populations. It has become a common trend throughout the world that in order to show International power, the more Nuclear weapons you have, the stronger, and more feared that you are. Although this may be true, with the spark of another worldwide conflict, many hardly recognize the devastation that comes with nuclear weapons on the civil and environmental stage.

What many do not realize about Nuclear Weapons is the environmental disaster that comes with every use. They are notorious for the destruction of the ozone layer, and producing a toxin called “black smoke”. The reason that black smoke is so harmful to our environment is because of how it blocks sunlight from reaching our earth. According to nucleardarkness.org, “The smoke would form a stratospheric smoke layer that would block sunlight from reaching the surface of Earth for a period of about ten years.” This blockage of sunlight could enter our world into an Ice-Age like state in under 4 hours.

Nuclear weapons have been undermined because of their dormant-like state. During this state, countries have had an innumerable amount of time to develop and strengthen their weapons, making them overall more efficient and deadly. What little realize is that the Fat Man and the Little Boy – the bombs formerly dropped at Hiroshima and Nagasaki – have been surpassed by Nuclear Weapons that contain up to 3333.33 times the power. (businessinsider.org)

With the various conflicts that are taking place overseas today, little has to be done in order to set someone off these days. Although many would think of the U.S., Russia, and China as being the number one threat, there are upwards of 15,000 Nuclear Weapons spread across nine separate countries. This should be a worldwide concern, for leaders must start realizing that showing this dominance of stocked amounts of nuclear weapons will ultimately lead to our civil and environmental demise.

danger environment nuclear weapons international affairs international affairs
Published on Oct 26, 2016
Report a problem... When should you flag content? If the user is making personal attacks, using profanity or harassing someone, please flag this content as inappropriate. We encourage different opinions, respectfully presented, as an exercise in free speech.
Benilde-St. Margaret's School

Pollution is destroying our planet and we need to make a change.

Climate Change: Conditions that many cannot live in

This letter shows the next president how important it is that we address the pollution problems and that Climate Change is in fact a real yet dange...