My name is Lauren Wood, and I am writing you this letter with the hope that my stance on abortion rights will have a lasting effect on you, as well as the entire future of our country. Abortion is the intentional act of ending a pregnancy. It is commonly exercised in times where the woman is not prepared to be a mother due to immaturity, lack of financial resources, or health concerns. In some cases, the fetus would be a reminder of a rape that the woman may not be able to bear for the rest of her life. Whatever the cause of pregnancy, abortion rights provide women with the means necessary to avoid a situation that would be harmful not only to themselves, but the fetus, too, which is why they must remain legal in every state.

Imagine you are a fourteen-year-old girl just entering high school. Life is already throwing pressures at you, such as maintaining a perfect appearance at all times and the importance of success in school. Then, one day, you find out you are pregnant, and everything suddenly becomes a million times more difficult. Whether the result of an intentional encounter or not, pregnancy is an enormous challenge, especially at this age. Now, you must drop out of school to hunt for a job that could provide a teenager with enough money for the supplies a child would require. You must also find a space for the kid to stay, fit time within your schedule to care for it, pay for health insurance and medical bills, and much more. Meanwhile, any hope of still having a social life has vanished. You must also remain a responsible example for the child, a is nearly impossible task with such limited life experience. All of this is extremely difficult for any young woman to achieve, especially without help from family members, which, unfortunately, is the case for several women. The lack of proper resources could lead to the child being raised troubled and without the necessary care, causing all of the woman's work to be nearly useless. According to Advocates For Youth, over 750,000 young women face this reality each year.

Many argue that adoption is a better solution than abortion. However, though that may be true for some women, it is not true for all. There are times when the pregnancy alone might be too much of a burden for a young woman trying to succeed in work or school. There are lots of side effects of pregnancy that could be traumatic or harmful to someone who isn't fully mature yet, such as hormone fluctuations causing depression. The adoption process itself is often traumatic, too, as giving away a baby once it's born can be extremely difficult for any mother.

It is important that the woman has an alternative she can turn to so that she is not forced to endure these challenges. Whether she decides to have an abortion or not, in the end, it must be an option. The best way to prevent such a physically and emotionally stressful situation is for the proper treatment to be available. If a woman feels she's ready to give birth, she should be able do so. If she doesn't, then she should have the right to a safe and legal abortion. 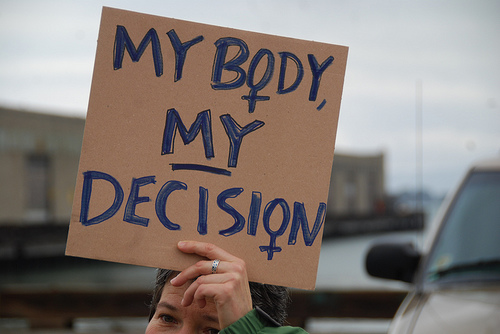 freedom women's rights legal safety abortion
Published on Nov 7, 2016
Report a problem... When should you flag content? If the user is making personal attacks, using profanity or harassing someone, please flag this content as inappropriate. We encourage different opinions, respectfully presented, as an exercise in free speech.
Arts & Humanities @ Berkeley High School

A college education is key for success in the USA and should be made affordable for everyone.

The Future of our Energy Consumption

reproductive rights and the importance of accessible care.

What we do about climate change will determine the future of the people of this earth.

"What was she wearing?" "Was she drunk?" "Was she leading him on?" Victim blaming is a huge problem in today's society. It justifies sexual assault...

Giving A Voice to the Voiceless

Why abortion is anti-American

Many personal choices such as Abortion and Same-Sex marriage, have a controversial title, but its up to us to put an end to that.

Abortion is a very serious matter and is just being pushed to the side or being ignored. Abortion should be illegal no matter what the circumstance...

Careless Abortions Should be Stopped

The killing of a human being is wrong, even if that human being is yet to be born. Fetuses feel pain during the abortion process. A 2008 peer-revie...