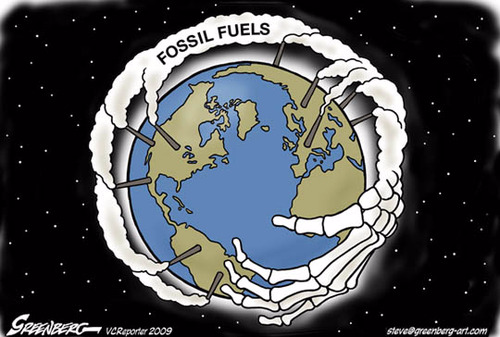 Social and political issues consume the headlines and political debate. Though not all issues you face will be wholly political. Global warming is a scientific topic, and a blatantly immediate issue. Species are going extinct, and there are 2.5 million homeless children in the U.S. Glaciers are shrinking and permafrost is melting. The world is ending and we know it. It’s not approximated to be uninhabitable in my lifetime or yours, but we are to have great grand children, and what of their children? Will we chose for our legacy to be quite literally ending the world?

A majority of greenhouse gasses, gasses that have been trapped in our atmosphere and are heating it, are from burning fossil fuels such as oil, coal, and gas. The steam engine was invented in the industrial revolution, but even Thomas Savery didn’t believe that the continued use of fossil fuels was at all a good idea. Scientific American says that the U.S. spends $13 million an hour on fossils fuels, mounting to the looming $388 billion that was spent in 2014. This is a enormous amount of money that is being put towards fuel. As Environment America says, “we are dependent on fossil fuels at a time of growing demand and weak supply.” The use of coal, oil, and gas is distasteful and untimely. It’s in no way proving positively to the American people for our tax dollars are going into the destruction of our ecosystem.

The burning of fossil fuels releases carbon and sulfur dioxide, which then carry to leave the atmosphere, but instead are stuck within. The sun's rays carry through the atmosphere and warm the earth with the help of the gasses, making it much warmer than it needs to be. There are sea levels rising and states in drought. As the environment strays farther from the naturally conducted order, the more unlivable climates will appear. Natural disasters will normalize and we are to blame. Unsurprisingly, there are hundreds, if not thousands, of scientific advances in clean and renewable energy. Though fossil fuels are the major cause of greenhouse gasses, agricultural practices also aid the greenhouse gasses. Cattle and biowaste alike release a sizeable amount of greenhouse gasses, but these things can be used to create renewable energy.

Wind turbines generate power from the wind. Tidal power is from the ever turning tides, and solar plants fill meadows for sheep to graze. There are biomass power plants that use chicken poo which, if not dealt with, contains carbon and releases methane. Geothermal energy is created by geysers. Then there is the very best of all: sewage waste. Sewage waste contains organic compounds that store useable energy in their chemical bonds. The sewage waste created 70-140 gigawatts in the test study. This is shocking because the production of one nuclear plant is 1 gigawatt. The enormous amount of money being spent on fossil fuels can be put towards implementing the clean renewable energy that scientists in America have proved to be possible.

In America, global warming is controversial because it has stopped taking place as a scientific conversation and has been twisted into a political conversation which can no longer be tolerated. Ignorance can not be tolerated in a society that will sustain. Global warming is about the use of fossil fuels, deforestation, thawing permafrost, shrinking glaciers, rising sea levels, and whole species dying off, not the price of gas at the arco.

climate change
Published on Sep 17, 2016
Report a problem... When should you flag content? If the user is making personal attacks, using profanity or harassing someone, please flag this content as inappropriate. We encourage different opinions, respectfully presented, as an exercise in free speech.
New Technology High School

The cost of a higher education is getting out of hand. People today are still struggling to pay their college debt years after graduating. Isn't co...

Prevent the merging of religion and politics to save our country from the divisiveness that threatens to tear it apart.