Dear the Future President of the United States of America,

There are too many animals that are being killed everyday, simply because there is “no room” for them. So innocent, healthy, lovable animals are being murdered everyday because a place that deems itself a “shelter” has no room to shelter them. Every year, 2.7 million dogs and cats are killed due to euthanasia. That number excludes all other animals that sadly face the same fate. Of animals entering shelters, 41% will be killed by some means of euthanasia. Although euthanasia literally means “good death”, I would love to live in a world where nothing is sentenced to a “good death”. But even euthanasia can be executed in many different ways.

Although the most common way is a quick shot of sodium pentobarbital, which puts the animal to sleep very soon after injected, facilities still use gas chambers and bullets to the head. This is very painful to the animal, as it might not kill them the first time it is administered which causes a slow death. This is when it crosses the line between ethical and unethical. These are innocent animals that have no place to go, not criminals facing the death penalty for committing a capital offense. There needs to be regulation in the way animals receive this so called “good death” in shelters that aren’t No Kill.

I strongly believe that each and every animal deserves to live and shouldn’t be deemed unwantable simply because there is no room for them to live. But because it is impossible for every animal to be spay and neutered to prevent this overpopulation of animal shelter, we need to humanely deal with this problem, as it is not the animals fault they were brought into this world. 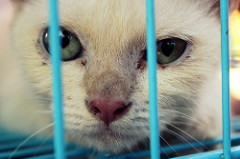 euthanasia animal abuse animal cruelty animal rights
Published on Nov 7, 2016
Report a problem... When should you flag content? If the user is making personal attacks, using profanity or harassing someone, please flag this content as inappropriate. We encourage different opinions, respectfully presented, as an exercise in free speech.
Judge Memorial

Animal has been going on for quite a long time. It needs to stop. you can help fight this war. By getting others peoples attention. The animals ar...