Did you know that in factory farming in America, there are nine birds raised in every square foot and when males are born, they are ground up or suffocated that day? The definition of factory farming according to the ASPCA is a system of rearing livestock using intensive methods by which poultry, pigs or cattle are confined indoors under strictly controlled conditions. There are many more shocking facts about the abuse and conditions in factory farming that we need to fix. The torture and abuse of these innocent animals needs to be recognized. As a country we should stand up and create a law to protect them. Although many people say that we need factory farming to supply the demand for food of the growing population, I believe that there are other ways to accomplish this than abusing them.

One of the many horrible things that they do to the chickens is burn off their beak. They do this to prevent cannibalism within the chickens, feather plucking, and to prevent fights. Most chickens aren’t given any anesthesia or painkillers, so right after the process chickens die from shock. Something that helped me realize the horrors of this process is when Forcechange.com announced that “Researchers state that beak trimming cause lifelong sensory deprivation… beaked birds have difficulty grasping food and are incapable of preening themselves and their cage mates.”

Another big problem with factory farming is the methods of death. For example, according to the Britannica Advocacy for Animals one method is called the “Killing Cone.” In this method they cram live chickens into a metal cone shaped holder with the chickens head hanging out. They then grab the chicken's head out of the bottom and cut it off. Another common method is the “Electric Stun Bath.” In this process they take live birds and hang them upside down by metal shackles, dip them into a bath and electrify it, then slit their throats with a metal blade. All of that is happening while the animal is still alive. There are many more horrific methods used and these are just some of them. 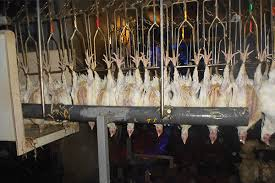 One last major topic with this is the security and equipment in these buildings. There have been many more appalling stories that go along with this topic. Peta.org said that they did an undercover investigation and what they found was very disturbing. “The killing machine blade often cuts birds bodies instead of their throats. Although aware of this problem, the supervisor offered no solution.” Another thing they discovered was that workers would throw the chickens against the shackles, hang them by their head instead of feet, and once even broke a chicken's back by banging it against a rail. Even the supervisors let their workers do this. Once, a supervisor told his worker that it was acceptable to rip off the chicken's head if they hung it wrong. All of these go to show that there are basically no rules or guidelines to what happens to these poor innocent animals.

There are many different ways that we could prevent all of these things from happening even things as small as tie in a string around their beak instead of cutting it off. Although some people say that we should do anything necessary to get the food we need, I think that is a horrible thing to say. Yes, we do need chickens for food, but we don’t have to starve, abuse, slaughter, electrify, and suffocate them to get what we need. Something we could do to prevent the debeaking process is give the chickens more space, or tie a string over their beak. There should be laws that prohibit the abuse of animals. Finally, something we could do to decrease the pain in the killing of animals is to make it more peaceful. They could do this by giving them anesthesia or medicine that puts them to sleep and then doing it, instead of electrifying them or suffocating them. Even though there are many more terrible things that go on and many more animals that go through this, this is focused just on chickens. Trust me that there are WAY more horrible things going on. My plea, Future President, is for you to not sit there and watch the animals suffer, but rather stand up and defend these animals.

animal abuse food
Published on Oct 11, 2016
Report a problem... When should you flag content? If the user is making personal attacks, using profanity or harassing someone, please flag this content as inappropriate. We encourage different opinions, respectfully presented, as an exercise in free speech.
Weddington Middle

Animals around the world are being taken for granted every day, being mistreated. I want to help save these helpless creatures as much as I can.