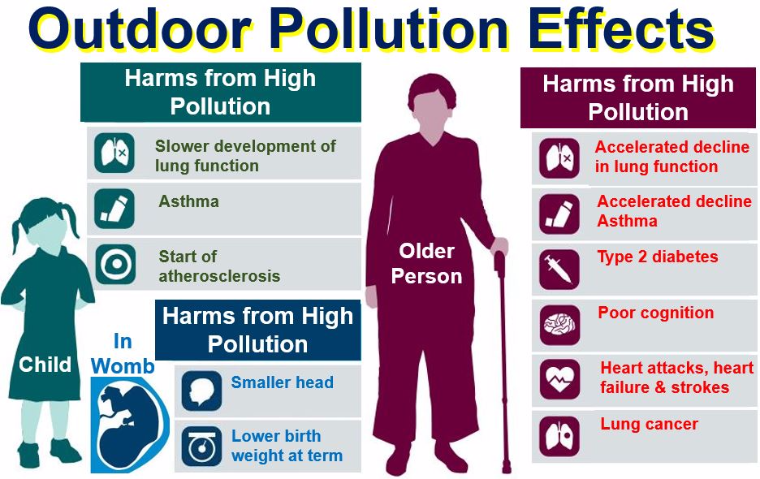 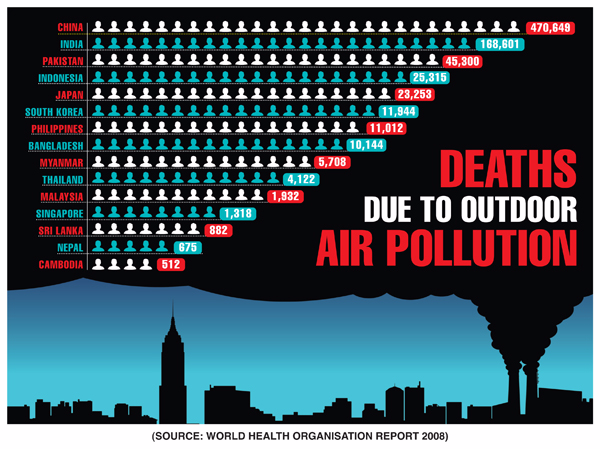 There are many different effects of pollution, some can be fairly common and unharmful but others can kill you if not treated. Some short term effects According to ESchoolToday.com are “irritation to the eyes, nose and throat, and upper respiratory infections such as bronchitis and pneumonia. Others include headaches, nausea, and allergic reactions.” These aren’t too terrible but for certain people they truly are. Some long term effects also according to ESchoolToday.com are “can include chronic respiratory disease, lung cancer, heart disease, and even damage to the brain, nerves, liver, or kidneys. Continual exposure to air pollution affects the lungs of growing children and may aggravate or complicate medical conditions in the elderly.” Now, some people might argue or say that these illnesses aren’t that bad, but in fact they are. Many of these illnesses can easily result in death if not treated. My evidence is coming from Newsweek and they said: “AIR POLLUTION CLAIMS 5.5 MILLION LIVES A YEAR, MAKING IT THE FOURTH-LEADING CAUSE OF DEATH WORLDWIDE.” This is bad and we need to fix this as soon as possible. We can fix this problem quickly and easily if you had the desire to make a change in the world’s health Mr/Mrs. President. It’s all your choice, you can either see the world heal or see it die what do you want?

We can fix our pollution problem in many ways including one way that China is already using. According to Money.cnn.com, The world's largest air purifier is being used in China which makes the air around the purifier 75% cleaner, and it only needs as much power as a tea kettle to run, that’s 1,400 watts! What this machine does is makes air cleaner for china using little electricity this will help China become a lot cleaner than before. Also, if you’re thinking well this machine will just create more pollution it won’t. It’ll bring down pollution believe it or not!

Another thing that can really help us out as well is buying more clean ways of producing electricity. Now some people might say “Oh! It costs way too much money!” Well if you’re thinking that, you’re simply not right. According to National Geographic, “Solar electricity's price tag has plummeted 70 percent, says a new report, as SolarCity rolls out a low-cost, super-efficient panel.” This means that solar panels are a lot more affordable than before. This drop in price will mean a lot more people will buy solar panels and help the world’s health. If we have a solar panel for 30% of its original price that’s pretty jaw-dropping and answers the people that don’t believe in natural energy.

Overall, it becomes pretty clear that really need to help heal our world while we can, if we don't take action now we may or may not be able to later. If we don’t act soon we might not be able to fix this major problem around the world. We have so many options to help out our planet from simply turning lights when you don't need them to a giant air purifier that takes little energy to power. Mr/Mrs. President, it’s your choice. The only thing you need to do is make the right choice...

eSchooltoday. “Effects of Air Pollution on Humans, Plants and Animals.”

Effects of Air Pollution on Humans, Plants and Animals,

From his hotel room on the 32nd floor. “World's Largest Air Purifier Takes on

By 2050, urban air pollution is estimated to cause up to 3.6 million premature

deaths worldwide each year, mostly in China and India. “Air Pollution In

civil rights pollution air quality health disease
Published on Oct 6, 2016
Report a problem... When should you flag content? If the user is making personal attacks, using profanity or harassing someone, please flag this content as inappropriate. We encourage different opinions, respectfully presented, as an exercise in free speech.
Weddington Middle