I would like to say a few words about animal cruelty. It isn’t right that animals are suffering and dying because of us. My goal is to stop all kinds of animal cruelty, from factory farming to abandonment. There are many different ways that people are cruel to animals, but the ones I am going to talk about are the most common ways that people abuse animals. These are:  animal testing, factory farming, and animal / pet maltreatment.

First, I’m going to talk about animal testing. Animal testing is an issue that people should be more aware of. I think that if more people knew about the pain and suffering hundreds of animals have to go through to get a laundry detergent or mascara, they would stop buying that brand and find another brand that doesn’t use animals. Hundreds of millions of animals die every year due to tests, but only 8 out of 100 drugs that pass tests done on animals succeed in humans. After animals are tested on, they are either killed or put back in their cages and left to die. There are alternative ways to do drug tests that don’t involve animals and are cheaper, faster, and more accurate.

Another thing I will address is factory farming.  About 99% of all meat in America comes from factory farms. Animals raised in factory farms have a miserable life. Chickens are kept in cages that have as little as 0.6 square feet per chicken. When chickens are born that are unable to lay eggs (mostly roosters) they are put through a meat grinder alive on the day they hatch. The chicks that don’t get ground up get “debeaked” so they don’t kill each other in the cramped living conditions. The debeaking is done by burning or cutting the beaks off . Many scientists claim this doesn’t cause pain, but a lot of chickens die in the process. It’s not only chickens that are victims of animal cruelty in factory farms. Cows and pigs are also mistreated. Pigs are kept in filthy living conditions, and many of them get pneumonia. Pregnant pigs are kept in small crates that keep them immobilized for the whole four months of pregnancy. Dairy cows are often slaughtered before they are five years old, and cows raised for meat are kept out of sunlight so their meat is pale and attractive.

Finally, I will talk about abusing animals considered as pets. When you adopt a pet, you are agreeing to take care of it and love it. It is not all right to abuse it or mistreat it in any way. Around 9 million cats and dogs are put into shelters each year and around 1 million cats and dogs are killed each year due to animal cruelty. According to Stray Pet Advocacy, a non-government organization, the law against cruelty to animals states that “Cruelty to animals is defined as ‘Maliciously and intentionally mains, mutilates, tortures, or wounds a living animal, or maliciously and intentionally kills an animal; or overdrives, overloads, drives when overloaded, overworks, tortures, torments, deprives of necessary sustenance, drink, or shelter, cruelly beats, mutilates, or cruelly kills any animal or causes or procures any animal to be so treated.’ Animals shall be seized and impounded and ownership forfeited. These crimes may be charged as either a misdemeanor or felony, with punishment of a fine up to $20,000 and/or imprisonment up to 1 year. If a defendant is granted probation for a conviction, the defendant must pay for and successfully complete counseling as determined by the court. It is also a misdemeanor to ‘Carry or causes to be carried in or upon any vehicle or otherwise any domestic animal in a cruel or inhumane manner.’ Exemptions are made for farming, hunting and research.” These laws apply to all animals, but it can be harder to enforce these laws for a goldfish or guinea pig than a cat or dog.

As you can see, animal cruelty is a huge problem. Animals are suffering and dying because of us and it isn’t right. We need to be the voice for them and stand up for animal rights. 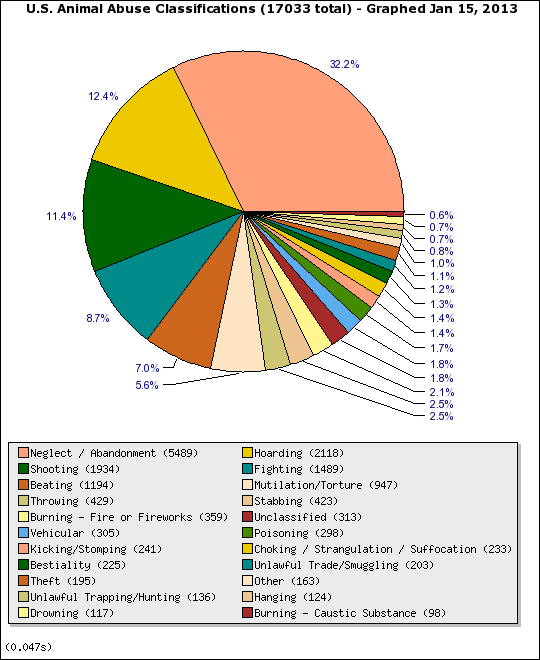 A Later Start for the School Day

Change the Start of School to a Later Time

Polluted water affects many including sea creatures, humans, and other land animals. It's an important issue that must be dealt with immediately.

Abortion needs to stop in the United States because it ruins a baby's life, who could have had an impact on the world.

Something needs to be done. The topic of police brutality certainly needs to be discussed and changed to better protect the people and the police o...

Animal Abuse is ignored and pushed aside for more "important" issues. Thing is, they need us as much as the others do.

We can help save many animals