Isn’t it a good feeling when you know you’re safe from the many threats across the globe? That you don’t have to worry about a foreign power taking control of everything you hold dear to you? Well that feeling won’t be there much longer if the US doesn’t have a strong enough military. Over the past few years of Obama’s presidency and the years before, the budget of the United States military has began to dwindle and this is threatening the security of the nation. Since 2012 the Obama Administration has began to divert billions of dollars to other departments of government, and limited military spending when Obama began to bring troops in the Middle East back home.

Most of the cut backs in military funding are simply because of spending on the war in the Middle East. President Obama limited this spending in hopes of bringing back more troops and saving money, not realizing the long term affects. Since 2013, there has been $50 billion USD a year in spending reductions which will dramatically effect the estimated $500 billion in projected spending over the next decade. The issue is not only affecting our military, but the country as a whole. According to General Raymond Odierno, who also served as Chief of Staff of the Army, "85 percent of the Army’s active and reserve combat units would be unprepared to fight after another year’s worth of cuts." This would put our country at certain risk to attack whether its by terrorists or a foreign country such as North Korea which has been threatening the US for many years. Thanks to Obama's funding cuts, it has put 40,000 people out of a job, leaving many of them homeless and on the streets. There has also been the lowest number of active ships (272) since the year 1916. Another event similar to Pearl Harbor in 1941 could put the US fleet in the ocean, and the US unable to defend or attack until ships have been rebuilt. Also according to Odierno, these spending cuts are "jeopardizing the Army's new weapon programs" which could in the long term lead to our military not having the technological advantage we have today.

We've all seen the common argument that "the military has spent enough and that other programs need money" and this claim is true. There are plenty of programs, departments, etc. around the country that not so much wants but needs the funding to work properly, but there will never be enough money to distribute to everyone. It all goes down to whether you want safety and security, to know that you are safe from whatever force is outside our borders or if you want to have more money into another program and sacrifice some of that safety and security.

Mr. Trump there are many instant and long term solutions that we can come up with and establish. There are a few departments in our government that have extra money every year, or that have gotten an increase in funding that wasn't needed. This money can be diverted towards the military. Another option would be a tax increase, especially in products known to cause harm to the body, or the recently legalized drug in many states, marijuana, with a 10-20% tax that would bring in large profit. Lastly, with your plans to leave the TPP (Trans-Pacific Partnership) and hopes of increased revenue, more money can be given towards the military's budget.

As you have hopefully read, our military is getting weaker every day and night and actions need to be taken to ensure that America has a strong military power. You have beaten the other candidates that opposed you and you have made many promises to the people of America. Do you want to be the president who doesn't live up to his promises? Do you want to make our country weaker, more likely to be attacked, and embarrass our country? Do you want to fail those who have supported you all this time? Please President-Elect Trump, consider your options and make our military great again. 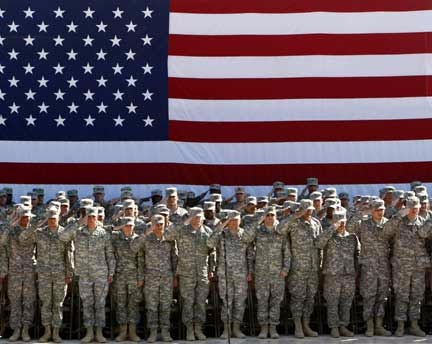 funding military funding military
Published on Dec 14, 2016
Report a problem... When should you flag content? If the user is making personal attacks, using profanity or harassing someone, please flag this content as inappropriate. We encourage different opinions, respectfully presented, as an exercise in free speech.
Lewis Middle School

Censorship in our country is over done, and overlooks the rights that every American is given.

I'm a kid that lives in a family who's all for guns. Turning on the TV to hear how everyone's concern about huge mass shootings, and they complain ...

Racism has been an issue for a while and it needs some addressing as well as minor adjustments.

I think that the president should let illegal immigrants stay in the U.S

Should the military allow women to serve in combat roles?

Men and women are supposed to be given equal rights, should serving in the military be that exception?

education and why we have to pay to learn