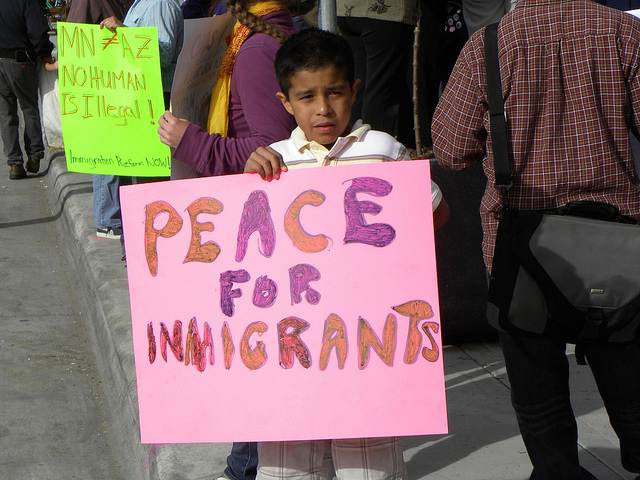 Dear Mr. or Mrs. President of the United States,

Deporting eleven million people does not benefit the United States. My reason for this would be that a lot of people who are here illegally work to provide a better life for themselves and their families. While attempting to provide for their families many of these people are forced into taking jobs that are unwanted by other people and not as high paying just to support their families in anyway they can. Trump mentioned that he thought of illegal immigrants as criminals which is not the case. Supporters of immigration point out that illegal immigrants themselves commit very few violent crimes because they fear deportation(Open Borders).

Illegal immigrants need to pursue a chance for citizenship while they still have the opportunity. This is important to immigrants because it gives them a sense of hope that they will be able to continue to live and work in the United States. They are probably very fearful of the fact that they might have to leave the country depending upon who becomes president. The rate of immigrants applying for citizenship is three times higher than last year. Trump believes that illegal immigrants are criminals "They're bringing drugs, they're bringing crime, they're rapists," Trump said of undocumented Mexican immigrants while announcing his candidacy last June (Roussey). Although this isn’t the case for Hilda Abraham, a mother of six from Mexico who says she has lived in Northern Virginia for 26 years (Roussey). She is currently pursing her dreams for a better life with her family. Hilda Abraham is an example of a immigrant who wanted a better life for herself and her family.

Donald Trump sends mixed signals toward his focus on deporting eleven million immigrants and building the wall. He mentioned that he thought of immigrants as a source of destruction. I agree in the way that people talk about Donald Trump sending mixed signals. Donald Trump managed to keep his composure and did not mention anything about the wall he plans to build if he wins the election while he was in Mexico. But on the other hand once he returned to the country he continued to talk about the wall being built along with commenting on Twitter that Mexico will be paying for the wall. He said this even after the president of Mexico said he would not be funding the creation of the wall separating Mexico and the United States. Immigrants would care being that they are the ones who are being criticized by a person who wants to run the United States and who bases the majority of his campaign on hate of human beings.

Along with immigrants, the people voting for the wall would care and support the idea of the wall being built. I understand that their there are some people like Trump who disagree and think illegal immigrants are nothing but criminals. Maybe some of them are but, most of illegal immigrants are in the United States to have a better life they are unable to obtain in the country they were born in.

I am convinced that illegal immigrants should not be deported. Otherwise they would not have tried so hard to get to the place they are today.  They wouldn't have gone to great lengths to find a safer place for their community. I propose that we should not deport illegal immigrants and keep the border the way it is if not open.

immigration
Published on Nov 7, 2016
Report a problem... When should you flag content? If the user is making personal attacks, using profanity or harassing someone, please flag this content as inappropriate. We encourage different opinions, respectfully presented, as an exercise in free speech.
West Seattle High School

Abortion is a matter that needs to be dealt with in America.

Why late-term abortion should be illegal throughout the country.

Drugs in the U.S.

Most of the drugs being imported to the U.S. are coming from Mexico. How is the President going to strength border control to help stop this problem.

Immigration is a very important issue right now because everyone is immigrating to the United States.