To the President of the United States,

What is something that is included with robberies, very mobile, used as a blunt weapon, and can kill various people in a matter of minutes? Gun violence is the most dangerous crime there is. There were 372 mass shootings in the US in 2015, killing 475 people and wounding 1,870, according to the Mass Shooting Tracker, which catalogues such incidents. Also, Some 13,286 people were killed in the US by firearms in 2015, according to the Gun Violence Archive, and 26,819 people were injured. My motivation or reasons to make this essay and claim include: Anyone who passed a Mentality class or has a certificate can buy a gun, not knowing what they’ll do with it. For example, people with mental issues and aggression prone with thoughts and struggles will be unpredictable. Also you can never really tell when someone has a gun on them leaving anyone vulnerable.

It is true that people will defend their right to bear arms and I’m not saying that they shouldn’t keep their right. Also people might need guns for their job or career and I’m not saying you should take those away either. While this may not seem important to some or some people could be oblivious, but most people take this problem to heart because what if someone close to you died due to gun violence? You would care, but as harsh as it may seem, other people are moving along with their day. In my opinion, people still have the 2nd amendment, but some aren’t qualified or in any situations to hold or bear a firearm. In reality a lot of people are dying from gun violence and we’re not doing anything that effective to make good progress. I purpose with every gun someone purchases, not only should the cashier look at your age, but they should be able to look up a mentality test of some sort.

Mental health plays a big part in making a decision if this person can have a gun. In one article that’s about how people can react to guns with emotions “Gun violence not a mental health issue, experts say, pointing to 'anger,' suicides. Plus, people with serious mental illness are three times more likely than those who are not mentally ill to commit violent acts again themselves or others, but that is still a very small number of people, about 2.9% of people with serious mental illness within a year. And the impact on gun violence statistics is marginal, amounting to about 4% of all firearm homicides, according to research as recent as last year” ("Gun Violence"). They’re not saying special people have a higher probability of gun violence but they’re saying people with emotional background and unstable mind set with suicide and anger.

Evidence is growing that gun violence in America is a product of weak gun laws. With each gun crime or anything that involves arrests and guns, most guns aren’t gathered and put off the street. Most are just swept back into the cycle out on the streets again. America has the most firearm deaths out of any rich country, “More than 30,000 people die in shootings in America each year; no other rich country suffers anywhere near that level of gun violence” ("Free Exchange"). I suggest when police officers arrest perpetrators they should put them in handcuffs then put all the guns in their trunk because when they catch the guy they are only doing three fourths of the job. Three fourths of the job is arresting them, accusing them, and locking them up. The last fourth is important, taking those guns off the street for more people to make havoc. I purpose police officers take more than the person at charge, but the weapons they used as well.

On top of gun rights there's the people who abuse them. My last point is based on you can’t truly base character or intention on someone’s appearance. I mean everyone has to buy a gun from somewhere and I know some are sold illegally, but some that are sold legitimately. Those people don’t know how stable they are or what they are going to use it for. Therefore, I believe people should go through a thorough test if they are worthy or capable of obtaining a firearm. “37% More than a third of Americans say they or someone in their household owns a gun” (Delsilver). One thing I did think of was replacing police firearm’s ammo from bullets to tranquilizers. So instead of killing them, they’d just be dazed till you could lock them away if they’re guilty. Also there's rubber bullets and tasers. Both as effective and non lethal.

In Conclusion, I am convinced that gun violence is the most over looked and spread out and most common kind of violence for the USA. Gun violence has many factors: Racism, Terrorism, Fear, ignorant people who don’t know how to use guns, and mental health. But all of this could be avoided if people took a mentality test and if police switched over to either rubber bullets or tranquilizers and try to keep not just people, but guns off the streets. 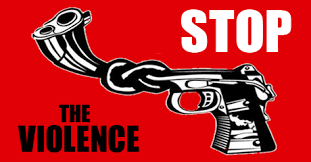 police brutality police education mental health gun issues
Published on Oct 24, 2016
Report a problem... When should you flag content? If the user is making personal attacks, using profanity or harassing someone, please flag this content as inappropriate. We encourage different opinions, respectfully presented, as an exercise in free speech.
West Seattle High School

Women deserve to have more rights are be safe from prostitution!

There should be stricter gun laws to prevent deaths from firearms.