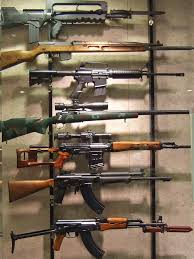 To the next President of the United States,

Despite the fact that handguns are more commonly used to kill Americans by 74% out of the many other ways to murder Americans (Speiser), and handguns are easier to obtain and lighter to carry, but I can reassure you future President, that mass shootings with assault weapons kill more people than random killings with handguns. Especially, since the mortality rate rises by 63% and the injuries by 156% when assault weapons come into play in mass shootings (Barret).

In addition, for the rest of the remaining citizens who disagree about assault weapons to be banned, you can show to these people of how dangerous assault weapons are, by continuing raising awareness about this. You can emphasize how these types of rifles can kill more people than it should when they are used, which can cause massacres. For example, Jonathan Lowy, who is the director of Legal Action Project at Brady Center, said "These are weapons that will shred your venison before you eat it, or go through the walls of your apartment when you’re trying to defend yourself… [they are] made for mass killing, but not useful for law-abiding citizens” (Barret).

Therefore, future President, I am convinced that by making assault weapons harder to obtain, you can help save many lives since it will lower the amount of mass shootings or even prevent them since these guns are commonly used in mass shootings.

gun issues
Published on Oct 28, 2016
Report a problem... When should you flag content? If the user is making personal attacks, using profanity or harassing someone, please flag this content as inappropriate. We encourage different opinions, respectfully presented, as an exercise in free speech.
West Seattle High School

A letter to the future President concerning ISIS.

Legalization of medical marijuana and voting against gun control.

America must prevent those who don't deserve guns from getting them.

Gun Control will be extraordinary to us. It will help our future become a better and safer place.

Gun control can easily be handled with the help of our president. The involvement of the president is very important to the lives in the US. The de...

Gun violence is something that could be easily helped if high capacity magazines were banned.