My name is Constantine and I hope you will take into consideration the facts of flooding, droughts, forest fires, and other natural disaster phenomena caused by global warming. Surprise Pop Quiz Question! Did you know that if flooding like the flooding Louisiana and Norfolk continues, D.C. will be one of the first to go? So, here's my question President, I want to know what you will do about global warming to ensure my future and the futures of all children? Global Warming is a problem b/c it has been destroying peoples livelihoods, their jobs, their homes, and in the process wasting huge amounts of money.

So far all previous efforts to combat global warming have been, and still are just humanitarian aid. Where the government gives the victim’s money and cleans up the mess. But, to prevent losing more money than we already have, you’ll have to create preventative measures, such as using greener energy than burning coal, and instead using solar, wind, and hydroelectric power. These energy sources will decrease the the pollution in the air already by not adding to it but this also means that cars have to be made greener and leaner The conventional methods of power generation like coal, and natural gas, cause pollution which then increases the amount of CO2 in the air, which in turn causes the earth to heat up, and melt the ice caps. This raises sea level and causes unpredictable climate conditions. Each time storm season comes around, a coastal city will get flooded. I doubt that you would let your own home be destroyed by a super storm. what should you do, you ask? Well

Good examples of the destructive powers of global warming taking effect include: THE CITY SWALLOWING FOREST FIRES in the northwest and California; the flooding in Louisiana where the water level was so high that the only thing left was rubble; finally there are droughts in California and all along the West Coast. Now here’s a quote from article by Justin Gillis on the subject of global warming “These tidal floods are often just a foot or two deep, but they can stop traffic, swamp basements, damage cars, kill lawns and forests, and poison wells with salt...high seas interfere with the drainage of storm water…in coastal regions that compound the damage from the increasingly heavy rains plaguing the country...those that recently caused extensive flooding in Louisiana. Scientists say these rains are...consequence of human greenhouse emissions” (Gillis: Norfolk Flooding).

There is more than enough evidence from scientists in the field of global warming to convince any politician that we have a problem. Here's some more evidence from proof meister Gillis on how much the government has been neglecting the problem"...“Once impacts become noticeable, they’re going to be upon you quickly,” said William V. Sweet, a scientist with the National Oceanic and Atmospheric Administration in Silver Spring, Md., who is among the leaders in research on coastal inundation. “It’s not a hundred years off — it’s now.”..." Seriously, even car companies have turned to help fight the battle and yet you stand by and do nothing while the U.S. is Burning, Drowning, and Wilting of Thirst.  Whether or not you agree on the reasons is irrelevant. The myth of controversy in the scientific community is just that, a myth. Some scientists say that modeling is hard. Others say that there are combined effects. But all know that we have a problem.

Maybe you don’t believe in global warming but you should be able to see we are in trouble as a planet. My suggestion is that you listen to the people who have backgrounds in this field and to those who care about the earth. although you may not believe it's happening eventually you will suffer too, so some good advice is to take some initiative and stop the flooding especially b/c it causes the most damage, like maybe instead of building a wall on the border build a wall to keep the water out. Keep political gain and greed out of the science, fix this problem and heal mother earth before she heals herself and in the process wipes out humanity.

Thank you for your time and consideration.

With my best regards, C.N.O. aka The Gummy Bear 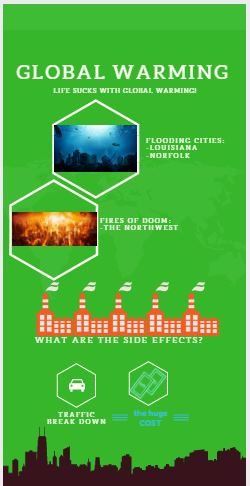 hunger global problem environment Poverty money
Published on Nov 10, 2016
Report a problem... When should you flag content? If the user is making personal attacks, using profanity or harassing someone, please flag this content as inappropriate. We encourage different opinions, respectfully presented, as an exercise in free speech.
West Seattle High School

Hundreds of millions of people nationwide are struggling due to world hunger. This issue is ruining lives and causing many children to become malno...

Why gay adoption SHOULD be legalized in ALL 50 states!

Fix the educational system so the future kids of the nation can learn to strive instead of conform.

The immigrant population deserves to live a quality of life that is equal to ours. Meaning they should have the same opportunities we have in the U...

A letter about why poverty needs to be looked at more closely, and in turn, fixed.

The environment is an important part of our country.

Education is a key to success, and teachers make this possible, but a step towards improving the overall education in our nation is by having highe...