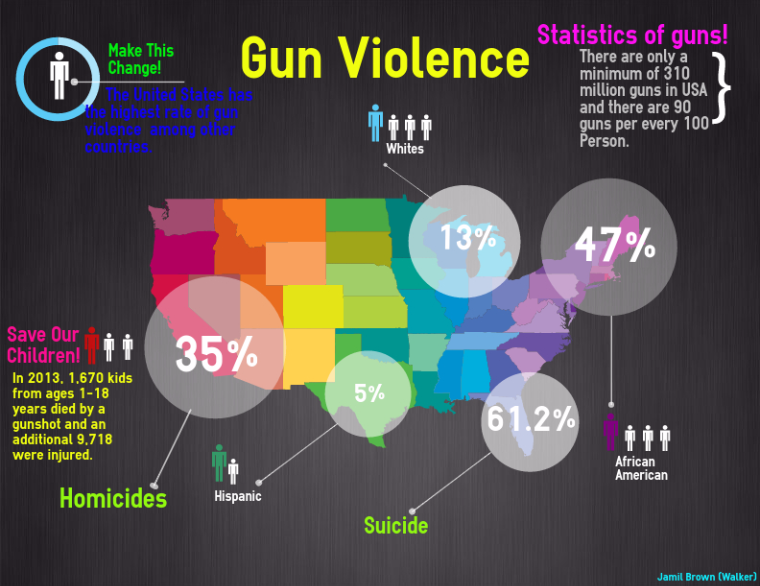 How would you feel if your love one was shot by someone with a gun? In this article I will be addressing the topic “gun violence”. When I am outside I feel scared that I could to either get shot any second. As a civilian we should not be scared for our life because of someone who has a gun. When you become president will you be able to take a stand for gun violence? Will you be able to save Americans from gun violence?

The United States has the rate of gun violence among other countries. Statics show that other countries and US states with high rates of gun violence and gun possession. There are only a minimum of 310 million guns in USA and there are 90 guns per every 100 Person. In 2013, 1,670 kids from ages 1-18 years died by a gunshot and an additional 9,718 were injured. Hundreds of people was killed by someone with a gun. There were statistics that say 47% was black , 13% was white, and 5% was hispanic. To the next president will you be able to put an end to this topic “gun violence”?

gun deaths homicide killing suicide gun issues
Published on Nov 7, 2016
Report a problem... When should you flag content? If the user is making personal attacks, using profanity or harassing someone, please flag this content as inappropriate. We encourage different opinions, respectfully presented, as an exercise in free speech.
Cristo Rey Philadelphia High School

In this letter to the next president I discuss how transgenders should be able to use their preferred bathroom.

Suicide is something that isn't looked at in the US as a big problem. It cannot go unnoticed. We as a community need to step up and fix this problem.

Gun related deaths and incidents are getting out of hand and need to be stopped, and the main ideas against gun control are heavily flawed.