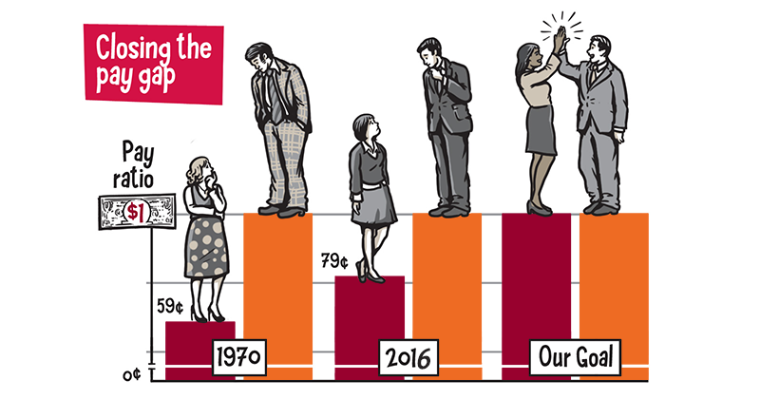 There are women out there that are homeless, work three jobs, don't get paid enough to buy their kids food or clean clothes. These are some of the realities of women affected by the wage gap. The wage gap affects families economic security because they miss out lost wages. The wage gap is the economic difference between the earnings of the working man compared to women (79 cents to the dollar). It's time to give the hard working women of this country the equality and pay they deserve

According to CNBC, the wage gap for mothers can reach up to 33% less than white men, that might not seem like a lot but for every thousand dollars that is 330 dollars less and for every ten thousand dollars working moms earn 3300 dollars less. That is a lot of money and can be the difference in paying rent and taxes each year. Sure not every woman works 3 jobs and is in poverty but don't you think that it isn't just to give men more pay because of their gender? It's not like we get to choose what gender we are and basing on something that is out of our control isn't just, and isn't America the land of the just?

According to fortune.com if we close the wage gap , poverty among single working mothers would fall by a third or more thus providing them with opportunity and their children the future of America will have more job opportunities and a better quality of life. I have family who were affected by equal pay. My great grandmother had to work 2 jobs and take care of kids. They sometimes couldn't afford to buy milk from the store. Some people think the wage gap isn't real, but if you look at the injustice and how people like Jennifer Lawrence,Serena Williams and Emma Watson all women who are beautiful and talented, are standing up for their rights because they don't get paid as much as their fellow coworkers you can't deny the facts that its real and affects everyone.

The USWNT has been told they will not get equal pay because they are not as strong as men and their style of play isn't as good. The USWNT went on to win the FIFA world cup against china the 2nd best soccer team in the world (5-2) beating out the men's national team who got knocked out by Belgium a team that wasn't ranked in the top 10 at the time. Women might not be stronger than the men in their job but studies show that brains prevail over brawns. The census bureau American women lead men in educational achievement in all college degrees, thanks to the wage gap women struggle to pay off student loan debt more than men do.

This picture shows the US women’s National team after they won the FIFA World Cup in 2015.

What I am asking may take time but according to fortune.com if we don't take action women won't see equal pay in 117 years. Even though congress passed the Equal Pay Act in 1963, women still are not benefiting enough from it. If we pass the paycheck fairness act ,it would make sure that wage details are made public for companies , so we could check if they were fair or not. That act will help but we should also set up a minimum wage for women and make it equal to or at least more than 79 % to the dollar. I think those solutions combined could very well be the start to see women be treated and paid equally.

Seeing these truths shouldn't Women be paid equal if we work hard to achieve our goals and dreams. We should not be oppressed by earning around 500,000 dollars less in our careers for working equally as hard as men. So I ask you the next president of the united states to help the women of this country reach our goal for justice and equality!

wage gap discrimination women's rights rights equality
Published on Oct 11, 2016
Report a problem... When should you flag content? If the user is making personal attacks, using profanity or harassing someone, please flag this content as inappropriate. We encourage different opinions, respectfully presented, as an exercise in free speech.
Weddington Middle

Racism in America is a problem in the Unites States

Equality of men and women

This is why there should be equality between men and women

Discrimination is a problem in the US, but for years, it still hasn't been taken into consideration and fixed.